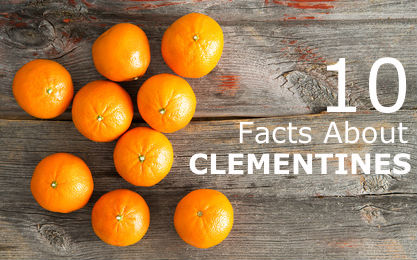 Here are 10 facts about clementines:

The clementine is a member of the Mandarin orange family. It is a cross between the tangerine and the Seville orange.

They take their name from Father Clement Rodier, a French missionary who is said to have created the hybrid in 1902. However, some people claim the clementine originated in China.

It is sometimes called an ‘Algerian tangerine.’

Spain is the world’s largest producer and exporter of clementines.

Clementines were first grown in the United States in 1909 at the Citrus Research Center at UC Riverside.

The clementine was not a very popular fruit in the United States until the late 1990s when the California clementine had a boost in popularity after the cold 1997 winter destroyed much of the Florida orange crop.

They are usually available in stores from November to January.

Clementines are normally seedless. However, bees sometimes cross-pollinate them with other fruit and the resulting clementines end up having some seeds.

One clementine has about 35 calories.