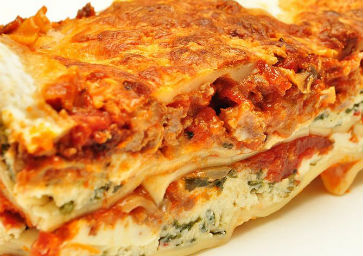 Here are 10 facts about lasagna:

Lasagna is a dish made of alternating layers of pasta, cheese, sauce, and meat and/or vegetables.

Lasagna is believed to have originated in Italy.

The plural of lasagna is lasagne. In Italy, the plural form, lasagne, is always used when referring to lasagna.

The word lasagna originally referred to the pot in which the dish was cooked rather than the food itself as it does today. In fact, it is believed by some that the word is derived from the Greek word for “chamber pot” (lasanon).

The Forme of Cury, a 14th century cookbook that was the first to be published in England, featured lasagna.

Weird Al Yankovic did a parody of the song “La Bamba” entitled “Lasagna” on his album, Even Worse.

Lasagna is the favorite food of the cartoon character Garfield.

In the Seinfeld episode, “The Butter Shave,” Elaine gives the nickname “Vegetable Lasagna” to the passenger next to her on a plane.