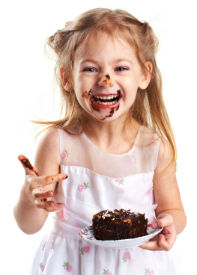 In honor of Halloween, a day when many of us are indulging in sweet treats, I thought I’d write about the health benefits of chocolate. Dark chocolate is especially beneficial. In fact, many experts recommend eating one or two ounces of dark chocolate every day.


High in Antioxidants
Cocoa contains flavanols, a type of flavanoid that is only found in cocoa and chocolate. Flavanoids are naturally-occurring compounds that occur in plant foods that act as antioxidants and help counteract free radicals in the body.

Lower LDL Cholesterol
Eating dark chocolate on a regular basis has been shown to reduce LDL cholesterol by as much as 10 percent.

Natural Anti-Depressant
Chocolate contains serotonin, a natural anti-depressant. Chocolate also stimulates endorphin production, which creates feelings of happiness and pleasure. In fact, one study found that melting chocolate in the mouth produced feelings of pleasure longer than passionate kissing. This may explain why many people naturally reach for chocolate when they’re depressed.

Cancer Fighter
Several studies have found chocolate to be one of the best cancer-fighting foods along with foods like red wine, blueberries, garlic, and tea. Two ways that chocolate works as a cancer fighter is by inhibiting cell division and reducing inflammation, though research is ongoing and will probably find additional ways in which chocolate fights cancer.

Prevents Tooth Decay
Research has found that the theobromine in chocolate prevents tooth decay by eliminating streptococcus mutans, a bacteria found in the oral cavity that contributes to tooth decay.

Longer Life and Less Disease
One Dutch study followed 200 men over 20 years and found that those who consumed large amounts of chocolate, both milk chocolate and dark, lived longer and had lower overall disease rates than men who ate little or no chocolate.

A Harvard study on the Kuna tribe of Panama resulted in similar findings. The Kuna consumed large amounts of raw cacao every day and the study found them to have lower overall disease rates and longer life expectancy than neighboring tribes who did not consume as much raw cacao.

To further strengthen the case for dark chocolate as a life extender, the world’s longest-lived person, Jeanne Louise Calment, lived to the age of 122 and many ascribed her longevity in part to her consumption of 2.5 pounds of dark chocolate a week.

High in Magnesium
Cacao is higher in magnesium than any other plant. Magnesium is an important mineral that helps in the regulation of the digestive, neurological, and cardiovascular systems. Since many people are magnesium deficient, adding magnesium-rich dark chocolate to the diet can improve overall health.

Artery Cleanup
Studies have shown that the antioxidants in cacao work like brooms in sweeping plaque out of the arteries.

Brain Health
Many studies have shown that dark chocolate is good for the brain. Researchers at Johns Hopkins University found that it can protect the brain after a stroke by shielding the nerve cells from further damage. Dark chocolate has also been found to improve memory. Researchers at California’s Salk Institute found that a chemical in chocolate called epicatechin improved the memory of mice.

So, this Halloween, while everyone else is gorging on unhealthy candy, grab yourself a bar of dark chocolate or, even better, some raw cacao, and give your body and brain a boost. If you make it a regular habit, you might just extend your life and be able to enjoy that longer life with less disease than your non-chocolate-eating peers.