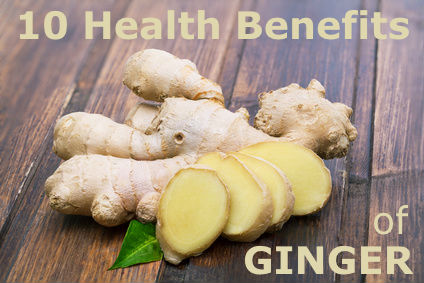 Ginger has been used as a natural remedy for many ailments for centuries. Now, science is catching up and researchers around the world are finding that ginger works wonders in the treatment of everything from cancer to migraines. Here are ten health benefits of ginger.


Ovarian Cancer Treatment
Ginger may be powerful weapon in the treatment of ovarian cancer. A study conducted at the University of Michigan Comprehensive Cancer Center found that ginger powder induces cell death in all ovarian cancer cells to which it was applied.

Colon Cancer Prevention
A study at the University of Minnesota found that ginger may slow the growth of colorectal cancer cells.

Morning Sickness
A review of several studies has concluded that ginger is just as effective as vitamin B6 in the treatment of morning sickness.

Motion Sickness Remedy
Ginger has been shown to be an effective remedy for the nausea associated with motion sickness.

Reduces Pain and Inflammation
One study showed that ginger has anti-inflammatory properties and is a powerful natural painkiller.

Heartburn Relief
Ginger has long been used as a natural heartburn remedy. It is most often taken in the form of tea for this purpose.

Cold and Flu Prevention and Treatment
Ginger has long been used as a natural treatment for colds and the flu. Many people also find ginger to be helpful in the case of stomach flus or food poisoning, which is not surprising given the positive effects ginger has upon the digestive tract.

Migraine Relief
Research has shown that ginger may provide migraine relief due to its ability to stop prostaglandins from causing pain and inflammation in blood vessels.

Menstrual Cramp Relief
In Chinese medicine, ginger tea with brown sugar is used in the treatment of menstrual cramps.

Prevention of Diabetic Nephropathy
A study done on diabetic rats found that those rats given ginger had a reduced incidence of diabetic nephropathy (kidney damage).

23 Comments on "10 Health Benefits of Ginger"

Sort by:   newest | oldest | most voted
Don Baker
Share On TwitterShare On Google

What about prostate cancer?

Vote Up
7
Vote Down
serrurier
Share On TwitterShare On Google

That’s correct ginger is a powerful weapon and people have to utilize it.

Vote Up
4
Vote Down
nick
Share On TwitterShare On Google

In Chinese medicine, ginger tea with brown sugar is used in the treatment of menstrual cramps.

Vote Up
-1
Vote Down
yashika
Share On TwitterShare On Google

I will cut ginger into small pieces and add cumin seeds and salt to it.Then i will keep it in sunlight to dry for 3-4 days. In case of stomach upset,i will take 3-4 pieces. Within 30 min it will cure indigestion.

Vote Up
4
Vote Down
Manhei
Share On TwitterShare On Google

I chop up a tablespoon of ginger and steep it like a tea … and it really settles my stomach and relieves all my gas whether I’m burping or farting. The bonus is it really helps your sore throat, because of its spicy properties.

Vote Up
13
Vote Down
Atte
Share On TwitterShare On Google

I just love ginger! It’s on my daily use with garlic and apple cider vinegar, and i don’t understand how i managed before.
But there’s something i have hard times with. Well, my girlfriend is pregnant and she’s having “morning” sickness…all day, every day. But doctors and internet says, “when with a child, one shouldn’t eat ginger, or sesame seeds”…or the child dies or becomes a mutant or something. Is there something to that rule, or why do they make so big deal about it?

Vote Up
6
Vote Down
ny
Share On TwitterShare On Google

is ginger good for somebody on RVD?

Vote Up
2
Vote Down
walter
Share On TwitterShare On Google

had no idea about the cancer benefits. thanks for posting.

Vote Up
1
Vote Down
Pauly
Share On TwitterShare On Google
I buy about 2lbs of ginger, peel it and slice it thin, julienne it if you can. Cook it down with the juice of one lemon and two cups dried sugar cane juice, add about a half cup of water too. After cooking it for about 90 minutes either use a stick blender or let it cool a little and use a regular blender or food processor until it is like a paste, put it in clean jars and refrigerate. That is used to prepare hot drinks when your sick. Place 1 tbs of ginger in a cup, the juice… Read more »
Vote Up
5
Vote Down
shernette anderson
Share On TwitterShare On Google

My urine use to smell so bad and i just happened to start drinking ginger tea. all these years i am complaining to all the doctors. i found the cure myself. thank u ginger.

Vote Up
12
Vote Down