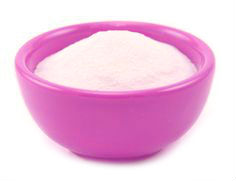 I recently found out about shirataki noodles and the healthy fiber they’re made from, glucomannan. It’s a powder made from the konjac plant, a type of yam that grows in certain parts of Asia. Here are ten health benefits of glucomannan powder:

Weight Loss
Glucomannan is a soluble fiber that absorbs several times its weight in water and forms a gel in the stomach, giving a feeling of fullness, slowing gastric emptying and slowing the digestion of fats.

Allergy Relief
In mice, glucomannan powder inhibited the development of atopic dermatitis and overproduction of substance P and proinflammatory cytokines. It also inhibited overproduction of IgE, the immunoglobulin that causes most of the body’s allergic reactions. (reference)

Lung Cancer Prevention
Studies in mice indicate that glucomannan powder may have a strong inhibitory effect on lung tumors. (reference)

Blood Pressure
In the same study of 63 men, the mens’ systolic blood pressure decreased by an average of 2.5%.

Constipation Relief
Glucomannan decreases fecal transit time and provides very good constipation relief thanks to its soluble fiber. The gel that forms in the stomach aids digestion and elimination as well.

Help for Type 2 Diabetes
Glucomannan keeps fasting blood glucose levels stable. In one study, diabetic patients were given glucomannan for 90 days and their fasting glucose levels fell by an average of 29%.

Healthier Meals
It can increase the volume of recipes and be used as a healthy thickener, which allows you to create lower-fat, lower-calories meals and desserts that are good for your overall health.