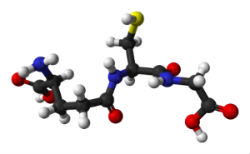 Glutathione is a molecule produced naturally in the body. It functions as an extremely potent antioxidant and plays an important role in each body system. Although it is not considered an essential nutrient (because it does not have to be obtained from food), many different health conditions may be a result of glutathione deficiency. Glutathione can be obtained from supplements as well as foods, particularly sulphur rich foods like cruciferous vegetables as well as fruits and meats.

Here are 10 health benefits of glutathione:


Cancer Prevention
Raising glutathione levels in cells may help prevent cancer growth. A test tube study published in a 2009 edition of “Oncology Reports” showed that glutathione could suppress the activity of reactive oxygen molecules, which could reduce the risk of cancer development. Human trials are needed to prove the potential that glutathione may have in preventing cancer, however, it is a powerful antioxidant that fights free radical damage, which is known to increase the risk of cancer.

Cancer Treatment
Many different side effects associated with cancer treatments may be curbed with glutathione supplements. It is known to treat radiation poisoning and fight the toxic effects of chemotherapy. Its ability to support the immune system may be vital during harsh cancer treatments. One study showed that boosting glutathione levels in bone marrow helped the body to resist the toxins associated with chemotherapy.

Antioxidant Protection
Glutathione is a powerful antioxidant that can help prevent oxidative stress to body systems as well as fight damage to the cells and DNA caused by free radicals in the body. Glutathione is also believed to boost the activity of other antioxidants like vitamin C and vitamin E.

Immune System
Studies show that the immune system is at its best when glutathione levels are well balanced in the lymphoid cells. Glutathione strengthens the immune system as it helps in the production of antibodies. It also helps the body fight and eliminate foreign toxins.

Anti-Aging
The antioxidant properties of glutathione can help prevent premature aging. It has been associated with slowing the process of age-related cognitive disorders as well as aging of the eyes, skin and body. In contrast, glutathione deficiency can contribute to the development of many different age-related diseases and conditions.

Eye Health
Glutathione supplements have been shown to prevent eye ailments such as cataracts and glaucoma. It is found in high levels in eye lenses and in the fluid of the inner eye. These glutathione levels decrease with old age and this decline is believed to contribute to these age-related eye conditions.

Cognitive Function
Glutathione supplements may be an effective treatment for memory loss, dementia and even reduce the risk of Alzheimer’s disease and Parkinson’s disease. As we age, glutathione levels drop significantly and this is believed to contribute to cognitive disorders and disease.

Psychological Disorders
A study published in a 2010 issue of the “Journal of Psychiatry and Neuroscience” found that regulating glutathione metabolism could benefit people who suffered from disorders such as bipolar disorder, compulsive disorders, schizophrenia and addiction.

Glutathione is the health bomb. It is the master detox agent. Anybody who wants to maintain their health in our ever increasing toxic environment should research glutathione. Truth! Nancy Nurse RN