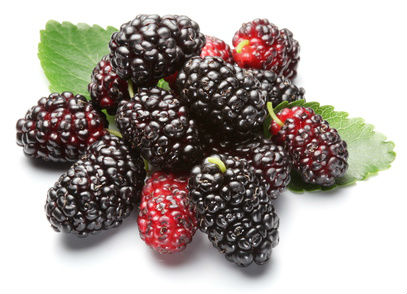 I’m a huge fan of berries of all kinds, but I’d never had a mulberry until I saw a bag of dried mulberries in Whole Foods the other day and decided to give them a try. I didn’t know anything about mulberries, which are also known as morus fruits, except that they are mentioned in the popular nursery rhyme, “Here We Go Round the Mulberry Bush.”

I guess I’ve been missing out because they taste great and they’re full of nutrition. They are considered an important food remedy in Chinese medicine. Here are ten health benefits of mulberries. It should be noted that many of these benefits have not been scientifically verified but are traditional folk remedies that have developed in countries where mulberries have been eaten for hundreds of years.


Cancer Prevention
Mulberries are a good source of resveratrol, a potent phytonutrient also found in grapes that researchers believe can prevent cancer and aid in the fight of existing cancers.

Life Extension
Because of their resveratrol content, mulberries may be a tool in one’s life extension arsenal, as resveratrol has shown in several studies to extend the life of mice.

Blood Tonic
In Chinese medicine, mulberries are considered a blood tonic, meaning that they cleanse the blood and increase its production, strengthening the entire system.

Kidney Strengthener
In Chinese medicine, mulberries are believed to strengthen the kidneys.

Liver Cleanser
In Chinese medicine, mulberries are believed to be effective in cleansing the liver.

Better Hearing and Vision
In China, tea made with mulberry paste is believed to strengthen one’s hearing and vision.

Constipation Cure
In Turkey, a treatment for constipation is to eat white mulberries on an empty stomach with a glass of water.

Anemia Treatment
Because they are quite high in iron, mulberries are a great food to use in the treatment of anemia.

Cold and Flu Treatment
In Turkey, mulberry molasses is used as a treatment for colds and flu. Their effectiveness in this way may be due to their high vitamin C content.

Sort by:   newest | oldest | most voted
Deb
Share On TwitterShare On Google

I live in southwest Ohio where the mulberry trees are full of fruit right now. We have several trees on our property and I love to just stand under them and eat mulberries one right after the other (while I hear my grandmother’s voice in my head saying something about washing them first). As I ate some this morning, I pondered their nutritional benefits and stumbled upon your list. Awesome! I feel better already … thanks!

Vote Up
7
Vote Down