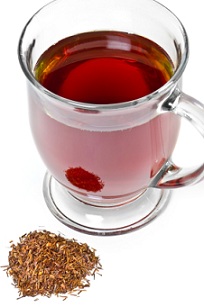 Rooibos is an herbal plant, grown only in South Africa. Though technically not a tea (true tea is derived only from the Camellia sinensis plant), the oxidized leaves from the rooibos plant are commonly referred to as Rooibos tea and consumed as such. Unlike white, green, black and oolong teas, which are all made from the same plant and offer similar benefits, rooibos offers its own unique set of compounds and nutrients.


High In Antioxidants
Rooibos contains great levels of flavonoids, a class of antioxidants touted for their wide range of benefits including reduced risk of cancer and cardiovascular support. Though the overall antioxidant support is considered better in green and white tea, rooibos remains a powerful antioxidant.

Cancer Prevention
One flavonoid tested in rooibos seemed to be even more effective in preventing free radical damage than the flavonoids tested in green and white teas. Animal studies suggest that it may be an effective treatment for tumors, prevent cancer cell formation, and may help to protect the body against damage caused by radiation.

Liver Support
Rooibos aids tissue regeneration in the liver in rats exposed to prolonged intoxication. It is believed that drinking rooibos tea may offer similar support to the human liver.

Respiratory Support
Rooibos tea is often used to treat respiratory illness. The flavonoid content of the tea seems to act as both a bronchodilator and an antispasmodic.

Helps Fight HIV
The alkaline extract of rooibos tea appears to help suppress the HIV virus. Drinking rooibos tea alone, however, has not shown to have the same effect.

Brain Health
A study in rats found that rooibos tea may have a significant effect on age-related brain deterioration.