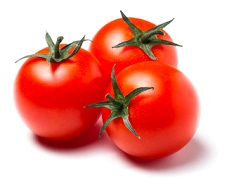 Though botanically categorized as a fruit, the tomato is generally referred to as a vegetable in the culinary world. Tomatoes originated in South America and did not begin to be cultivated around the world until after the Spanish colonization of the Americas. During the annual Spanish festival, La Tomatina, 150,000 tomatoes are thrown in a massive tomato fight over the course of one hour.

Here are 10 health benefits of the tomato:

One study showed that four servings of tomatoes per week for men reduced the risk of prostate cancer by 40%. Additionally, a study at the University of Montreal linked the antioxidant lycopene, abundant in tomatoes, with reduced risk of pancreatic cancer. Tomatoes have also been linked with reduced risk of lung cancer in multiple studies.


High In Antioxidants
Tomatoes are very rich in three common, yet very powerful, antioxidants: vitamin C, vitamin A and beta-carotene. They also contain good amounts of manganese and vitamin E. However, it is the tomato’s rich concentration of the antioxidant compound lycopene that makes it a real star in the antioxidant world. Lycopene is associated with reduced risk of heart disease, lower cholesterol levels, anti-inflammatory properties, and the prevention of age related diseases such as macular degeneration.

Bone Health
Antioxidants like lycopene may be essential in maintaining healthy bones because they help prevent oxidative stress to the bones. The high levels of potassium found in tomatoes may also promote good bone health.

Eye Health
Research has linked the antioxidants in tomatoes with reduced risk of macular degeneration. Lycopene and vitamin A are thought to have the most positive effects on the eyes.

Diabetes
Tomatoes are a good source of the mineral chromium, which may help diabetics regulate blood sugar levels.

Alzheimer’s Disease
A few studies have linked tomato consumption with reduced risk of Alzheimer’s disease and increased neurological function. However, more studies are needed to prove this connection.

Weight Loss
Diets containing tomatoes have been linked with reduced risk of obesity. More studies are needed to confirm the connection between weight loss and tomato consumption, however, tomatoes are a low calorie, nutrient dense food that makes them a healthy addition to any effective weight loss program.