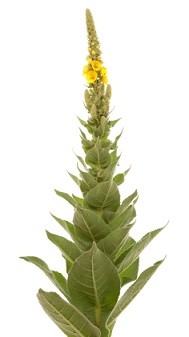 Mullein (Verbascum thapsus) is a popular natural remedy most often used to treat respiratory disorders since ancient times, but it also has many other medicinal uses.


It is sometimes called Common Mullein, Great Mullein, or, in the western U.S., “cowboy toilet paper,” because its leaves make good toilet paper in a pinch.

Mullein is sold as tea, in supplement form, and in drops and tinctures. You can buy loose leaf mullein leaves to make your own tea or to make your own pastes to use topically on the skin. Better yet, grow your own in your home garden! The leaves, stems, and flowers are edible but the seeds are toxic and contain a natural pesticide so be sure to avoid eating them.

Here are 11 health benefits of mullein.

Tuberculosis Treatment
Mullein was used as a treatment for tuberculosis in Europe as far back as the 16th century. One experiment in the 19th century found that mullein improved the symptoms of six out of seven TB patients at St. Vincent’s hospital in Dublin, Ireland. Some believed that mullein, if used in the early stages of the disease, could bring about a full recovery.

Today, it is known that mullein has anti-bacterial and expectorant properties, both of which are needed in the treatment of TB. Although it has not been studied extensively against mycobacteria, the bacteria that causes tuberculosis, it has been studied against other bacteria with great success and other plants of the same species as mullein have been specifically studied against mycobacteria with positive results.

More studies are needed but the case for mullein as a natural treatment for TB is promising based on historical evidence and modern studies.

Cold and Flu
As mentioned above, mullein has expectorant and anti-bacterial properties, which make drinking mullein tea helpful if you have a cold or flu with lots of congestion. According to researchers, it is the saponins in mullein that give it its expectorant properties. Mullein also helps to reduce the amount of mucus that is produced by the body.

Allergies, Asthma, & Bronchitis
Mullein is a great treatment for allergies, asthma, and bronchitis for the same reasons that it helps with TB, colds, and flu – it is anti-bacterial, anti-inflammatory, a natural expectorant, and reduces phlegm.

Ear Infection
Studies have found that mullein flower oil works as a natural remedy against ear infections. It is believed that this may be due to its anti-inflammatory and antibacterial properties.

Anti-Inflammatory
Mullein is a natural anti-inflammatory thanks to the verbascoside it contains. Verbascoside is a phenylethanoid and caffeic acid sugar ester.

Anti-Bacterial
As mentioned in the section about TB, mullein contains natural anti-bacterial properties. This is due at least in part to the verbascoside. Studies have found that verbascoside works particulary well against Staph infections.

Digestive Health
Drinking mullein has been found to help a number of digestive problems including diarrhea, constipation, hemorrhoids, and bladder infections. It is also sometimes used to get rid of intestinal worms.

Sedative Effects
Mullein has natural sedative benefits and may be helpful in the treatment of insomnia and anxiety.

Skin Soothing
Applying mullein oil directly to irritated areas of skin may help you to find relief from the discomfort associated with conditions such as a rash, burns, cuts or blisters. Because mullein is antibacterial and anti-inflammatory, it will also help with any skin conditions caused by bacteria or inflammation.

Joint Pain Relief
The anti-inflammatory effects of mullein can help to ease the pain associated with joint or muscle pain by reducing inflammation and swelling.

To find out about any side effects of mullein, see Side Effects of Mullein.