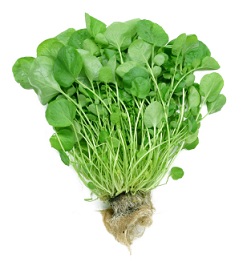 Watercress is a semi-aquatic, perennial plant and member of the Brassicaceae family. A staple food since early human existence, it is the oldest known leaf vegetable consumed by humans. Thus, it has been traded and cultivated across every continent in the world.

Here are 11 health benefits of watercress.

Cancer Prevention
Watercress is a cruciferous vegetable. Cruciferous vegetables are associated with reduced risk of cancer in many studies. In addition to the antioxidant effects of the vitamins found in watercress, its chlorophyll rich leaves are believed to aid in fighting free radical activity in the body as well as counterbalancing carcinogenic substances.


One study found that daily consumption of watercress helped the body turn one of the four major cancer-causing substances in tobacco smoke into human waste. The micronutrients in watercress are also believed to work in tandem with antioxidants, preventing DNA damage to white blood cells.

High In Antioxidants
Considered a super food because of its antioxidant content, watercress is loaded with vitamin C, vitamin A and chlorophyll, all considered powerful antioxidants.

High In Vitamin C
Vitamin C is a well known as a powerful antioxidant that helps prevent cancer, boosts the immune system and fights the common cold. Vitamin C may also be an effective treatment for scurvy and cataracts. One salad bowl of watercress contains about 50mg of vitamin C.

High In Vitamin A
Vitamin A is a powerful antioxidant. It boosts immunity and is great for the eyes, skin, bones and teeth. A salad bowl serving of watercress contains about 42% of the recommended daily value.

Boosts Immune System
The high levels of vitamin C in watercress boost the immune system and help fight off viral infection like the common cold.

Fights Infection
Research shows watercress may be an effective antibiotic. It helps the body fight candida and other bacteria in the colon and intestines.

Anti-Viral
Watercress may have great anti-viral effects. It has been used to treat bronchitis, coughs, the common cold and flu.

Digestive Health
The chlorophyll in watercress leaves contains many great digestive enzymes. These enzymes are also thought to help the body absorb nutrients during digestion. The leaves must be eaten raw as cooking them destroys these enzymes.

Bone and Dental Health
The rich calcium content of watercress should aid in keeping bones and teeth healthy and strong while helping to prevent osteoporosis.

Skin Health
Watercress may help clear acne and improve skin complexion when taken internally or applied as a lotion. It may even provide relief from skin conditions such as eczema and scabies.

Weight Loss
The high potassium content of watercress is thought by some to aid in weight loss. However, there is no evidence that potassium alone will help a person lose weight. The low calorie, nutrient rich content of watercress makes it an ideal addition to any effective diet. In fact, watercress has only 18 calories per serving, less than broccoli and many other greens.