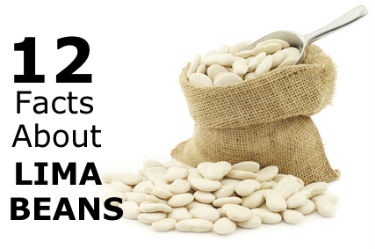 Here are 12 facts about lima beans:

The lima bean is a legume.

Its official name is phaseolus lunatus.

They are named after the city of Lima, Peru.

They are also often called butter beans or chad beans.

The three main varieties are dwarf, small, and large.

The lima bean is believed to have originated in either Peru or Guatemala.

Cultivation of the lima bean in Peru is believed to have started as far back as 6000 BC.

The lima bean was being cultivated in North America by 1301.

Raw lima beans contain a cyanide compound and should not be eaten raw. Only those varieties with the lowest cyanide levels are legally allowed to be sold in the United States. Cooking deactivates the cyanide compound.

One of the most popular North American dishes using lima beans is succotash, a dish containing primarily of corn and lima beans. Succotash is particularly popular in the South.

Lima beans have a high molybdenum content and may help people with a sensitivity to sulfites since sulfite sensitivity is often due to low levels molybdenum in the body.