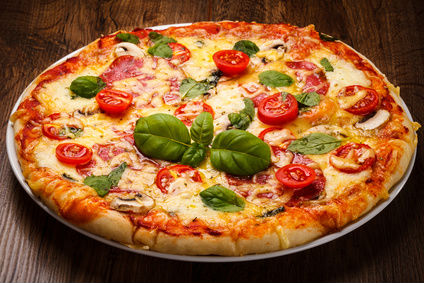 Who doesn’t love pizza? Here are 12 facts about pizza.

The first pizzas were just dough and tomato sauce – no cheese.

Antica Pizzeria was the world’s first pizzeria. It opened in Naples, Italy in 1738.

It wasn’t until 1889 that cheese was first added to pizza in Italy, when famous pizza chef Raffaele Esposito made a pizza for Queen Margherita using tomato, basil, and cheese to represent the colors of the Italian flag. Today, the simple margherita pizza remains one of the most popular pizzas in the world.

The first American pizzeria was opened in New York City in 1905.

The largest pizza ever made was at Norwood Hypermarket in South Africa. It was 122 feet 8 inches across, weighed 26,883 pounds, contained 3,968 pounds of cheese, and 1,984 pounds of sauce.

It is estimated that about three billion pizzas are sold in the United States every year.

Pepperoni is the most popular pizza topping in the United States.

About 350 slices of pizza are consumed every second in the United States.

About 93% of Americans eat at least one pizza every month.

Know someone who loves pizza? Check out our 10 Gift Ideas for Pizza Lovers article for some awesome pizza-related gift ideas.