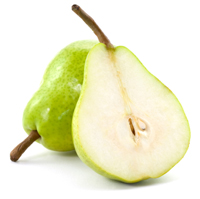 Pears have been cultivated and enjoyed for thousands of years. Homer referred to them as a “gift from the gods” in the Odyssey. Here are 12 quotes about pears from Shakespeare to Mao Tse-Tung.

“There are only ten minutes in the life of a pear when it is perfect to eat.” – Ralph Waldo Emerson

“All men should have a drop of treason in their veins, if nations are not to go soft like so many sleepy pears.” – Rebecca West

“It is, in my view, the duty of an apple to be crisp and crunchable, but a pear should have such a texture as leads to silent consumption.” – Edward Bunyard, ‘The Anatomy of Dessert’

“The pear is the grandfather of the apple, its poor relation, a fallen aristocrat, the man-at-arms of our domains, which once, in our humid land, lived lonely and lordly, preserving the memory of its prestige by its haughty comportment.” – Francois Pierre de la Varenne

“I warrant they would whip me with their fine wits till I were as crest-fallen as a dried pear.” – Shakespeare, The Merry Wives of Windsor

“A pear will never fall into a closed mouth.” – Italian proverb

“Don’t shake the tree when the pears fall off themselves.” – Slovakian proverb

“A man watches his pear-tree day after day, impatient for the ripening of the fruit. Let him attempt to force the process, and he may spoil both fruit and tree. But let him patiently wait, and the ripe pear at length falls into his lap!” – Abraham Lincoln