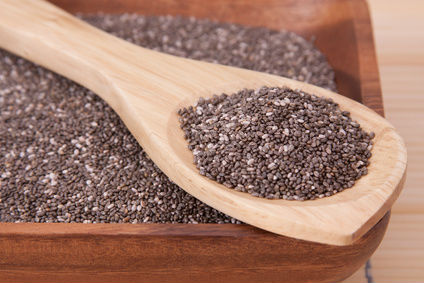 When you think of the word “chia” you probably think of chia pets. That’s what came to mind when I first heard about it (for good reason – chia pets are grown with chia seeds). I didn’t pay much attention to it and walked by the bags of it for sale in Whole Foods without a second thought. It turns out I was walking past a newly rediscovered “superfood.”

I say “rediscovered” because chia was prized as a superfood for thousands of years before it was nearly forgotten.

Here are 15 facts I found out about chia:

The chia plant (Salvia hispanica), sometimes referred to as chia sage, originated in the central valley of Mexico and is a member of the mint family.

Records indicate chia seeds were used as a food source as far back as 3500 B.C.

It was the third most important crop for the Aztecs, who recognized it as a “superfood” and prized it so highly that it was often used as currency.

Aztec warriors and runners are believed to have sustained themselves for an entire day on just a tablespoon of chia.

After the Spanish conquest, chia seed nearly disappeared as the Spaniards banned foods that were linked in any way to Aztec religion or tradition and virtually wiped out the complex agricultural system established by the Aztecs in order to grow foods that were popular in Spain instead.

The word chia is derived from the Aztec word chian, which means “oily.”

The name of the Mexican state of Chiapas, originally called Chiapan, translates loosely to “river where the chia sage grows.”

According to Aztec mythology, chia seed came from the nose of the maize god, Cinteotl.

The Chumash Indians of California also cultivated chia and prized it for its beneficial properties. This variety of chia is often referred to as chia sage or California chia.

Chia seeds have more Omega-3 fatty acids than any other plant food, including flax seeds.

Chia seeds are about 20% protein.

When soaked in water for 30 minutes, chia seeds form a thick gel. This gel also forms in the stomach when chia seeds are consumed. That sounds bad, but researchers believe it actually slows down the rate at which digestive enzymes turn carbs into sugar, making it especially beneficial for diabetics and others with blood sugar issues.

The popular Mexican drink chia fresca is made by soaking chia seeds in water until they become gelatinous and then adding sugar and lemon or lime juice.

Chia is hydrophilic and can absorb more than 12 times its weight in water. This makes it helpful in maintaining body hydration, something that is especially beneficial for athletes who need to remain hydrated during races and endurance activities.

Chia seeds are so high in antioxidants that they do not spoil easily and can be stored for long periods, unlike flax seeds.

3 Comments on "15 Facts About Chia Seeds"

Sort by:   newest | oldest | most voted
Chris Tucker
Share On TwitterShare On Google

I just soak the seeds, add Honey, and drink.

Vote Up
0
Vote Down
harvinder
Share On TwitterShare On Google

from where to get these seeds , i am living in chandigarh