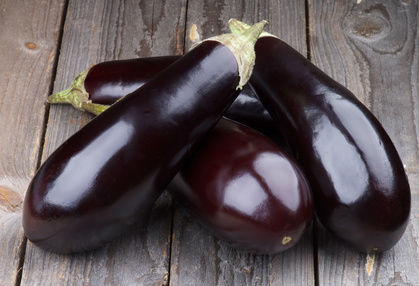 Eggplant is native to southern India and Sri Lanka.

It is part of the nightshade (Solanacene) family, which also includes tomatoes, potatoes, and chili peppers.

Like all other edible members of the nightshade family, the eggplant is a fruit.

Tobacco is also a member of the nightshade family. Like tobacco, eggplant and other nightshade plants contain nicotine, though to a lesser extent than tobacco.

Many people are sensitive or allergic to properties in eggplant and other nightshades.


Eggplant and other members of the nightshade family may worsen the symptoms of arthritis.

According to a 5th century Chinese scroll, fashionable Chinese women used to make a dye out of the skin of purple eggplants and polish their teeth with it until they were a shiny gray.

An eggplant is almost 95% water.

It is called “eggplant” in the United States, Canada, and Australia because the first eggplants in those countries were purely ornamental and featured egg-shaped white and yellow fruit. Today this variety of eggplant is called “White Egg.”

In Britain, it is called “aubergine,” the same as in French.

In South African English and in Indian, it is called “brinjal.”

The Italians call it “melanzane,” which means “crazy apple.”

The act of salting and rinsing eggplant to reduce bitterness is called “degorging.” An old practice, it is not as necessary these days because modern eggplants are less bitter.

Salting eggplant will reduce the amount of oil absorbed in cooking.

China is the top eggplant producer in the world.

4 Comments on "16 Facts About Eggplant (Aubergine)"

Sort by:   newest | oldest | most voted
Don Rechtman
Share On TwitterShare On Google
The only warning re: eggplants is allergy-related: biologically closely-related foods consumed within a couple of days of each other have the potential to cross-react, meaning, that if you’re sensitive to a food in a food family, other foods in that family if consumed too frequently may fool your immune system into thinking it is the other offending food. For example, if you’re sensitive to wheat (in the “grass” family), consuming rice (another “grass”) more often than every two or more days, while ordinarily non-offending, may cause a wheat-like reaction (including but not limited to hay fever). Eggplant is a member… Read more »
Vote Up
0
Vote Down
Raymond
Share On TwitterShare On Google

Vote Up
0
Vote Down
s. robinson
Share On TwitterShare On Google

i love aubergine. i just cant get enough!

Vote Up
0
Vote Down
R. Manoharan
Share On TwitterShare On Google

Excellent vegetable and has many vitamins.