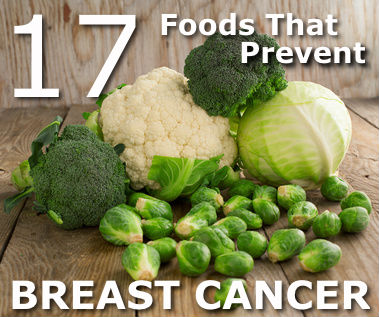 About 1 in 8 women in the United States will develop breast cancer by the age of 95. Genetics play a strong role in some cases, but lifestyle and dietary factors may also play a role in many cases. Here are 17 foods that prevent breast cancer or, once the cancer has developed, prevent it from spreading.

Turmeric
In one study of mice, researchers found that turmeric helped to prevent breast cancer from spreading to the lungs.

Blueberries
According to one study, the phytochemicals in blueberries work together to stop the growth and spread of triple-negative breast cancer, which carries a poorer prognosis than other forms of breast cancer.


Tomatoes
Tomatoes are high in lycopene, which has been found to lower the risk of breast cancer.

Avocados
Avocados are high in oleic acid, which studies have found to prevent cancer.

Red wine has also been found to significantly reduce the effects of radiation in women undergoing radiation therapy for cancer. One study found that the resveratrol in red wine makes the cancer cells more susceptible to radiation treatment while protecting the healthy cells from damage. (See our Red Wine Protects Against Radiation Exposure for more details.)

Green Tea
Studies show that drinking green tea lowers the risk of developing breast cancer and prevents it from spreading in women who have already have the disease. This is due to a compound in green tea called EGCG.

Garlic
Studies show that garlic eradicates breast cancer cells in testHave some garlic with that meat. Research has found that cooking garlic with meat reduces the carcinogenic chemicals in cooked meat that may be linked to breast cancer.

Cauliflower
Like broccoli, cauliflower is a great source of indole-3-carbinol.

Spinach
One study found that women who ate spinach at least twice a week had half the rate of breast cancer as women who didn’t eat spinach.

Dark Cherries
Studies in rats found that a compound in cherries may inhibit breast cancer.

Kelp
A study at UC Berkeley found that a diet high in kelp lowered serum estradiol levels in women and had phytoestrogenic properties. Sea vegetables also contain chlorophylones, fatty acids that may help in the prevention of breast cancer. In addition, kelp contains fucoidan, which has been found in studies to induce apoptosis (cell death) of cancer cells.

Artichokes
Research has found that artichoke leaf extract induces apoptosis (cell death) and reduces cell proliferation in many types of cancer, including breast cancer. One Italian study found that the flavanoids in artichokes reduce the risk of breast cancer.

Sort by:   newest | oldest | most voted
Stephanie Leach
Share On TwitterShare On Google

Great list! I would add red cabbage for its anti-cancer phytochemicals that likely protect against breast cancer. Shredded red cabbage can be easily substituted for some of the lettuce in a salad, improving the health benefits.

Vote Up
-1
Vote Down