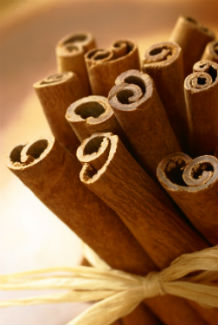 You may already know that cinnamon is good for you, but did you know there is a mythological creature called the Cinnamon Bird? Here are 18 interesting facts and trivia about this extraordinary spice.

Cinnamon (Cinnamomum verum) is a tree belonging to the Lauraceae family. The bark of the tree is what is used as a spice.

Cassia, a related spice, is sometimes sold as cinnamon but it is not “true cinnamon.” Cassia is sometimes called “Indonesian cinnamon” or “Chinese cinnamon.” In fact, most powdered cinnamon sold in the United States is actually cassia. It is harder to find true Ceylon cinnamon.

Cinnamon gets is scent and flavor from a chemical compound called cinnamaldehyde.

The word cinnamon comes from the Greek kinnamomon.

Cinnamon is mentioned in Chinese writings as far back as 2800 BC.


In the book of Exodus, God instructs Moses to make a holy anointing oil out of cinnamon, cassia, olive oil, myrrh, and hemp. (Exodus 30: 22-33).

There was an ancient belief in something called the Cinnamon Bird that supposedly lived in Arabia and used cinnamon to build its nests. Herodotus wrote that these birds flew to an unknown land to collect the cinnamon and took it back with them to Arabia. The Arabians got the cinnamon from the birds by tempting them with large chunks of raw meat. The birds took the heavy pieces of meat back to their nests, which caused the nests to fall and the cinnamon to rain down and be collected by the people.

Pliny the Elder wrote that the Cinnamon Bird did not exist and was a tale invented to raise the price of cinnamon.

Pliny also wrote that 350 grams of cinnamon were equal in value to five kilograms of silver.

In Ancient Egypt, cinnamon was used in the embalming process.

The Egyptians also used cinnamon medicinally and as a flavoring in food and beverages.

Cinnamon was used on funeral pyres in Ancient Rome. In 65 AD, Nero burned a year’s supply of cinnamon at his second wife Poppaea Sabina’s funeral in order to show the depth of his grief.

In the Middle Ages, cinnamon was only affordable by the wealthy elite of society. A person’s social rank could be determined by the number of spices they could afford.

From the 16th to the 19th centuries, there were power struggles among European nations over who would control Ceylon and the very lucrative cinnamon industry. In 1833, other countries began growing cinnamon and the need to control Ceylon diminished.

Hypocras is a famous centuries-old spiced wine that is spiced with cinnamon. It is named after Greek physician Hippocrates, who was believed to have invented it in the 5th century BC, though the exact origin is unclear. Hypocras is generally not produced commercially anymore, though it is still produced in small amounts in some regions of France.

Cinnamon has many health benefits. It has shown promise in the treatment of diabetes, arthritis, high cholesterol, memory function, and even leukemia and lymphoma.

Two teaspoons of cinnamon has about 12 calories.

7 Comments on "18 Facts About Cinnamon"

Sort by:   newest | oldest | most voted
Edward
Share On TwitterShare On Google
Well I love cinnamon. I found out about the benefits as I was going to buy acai supplements for body building, when I noticed that its the antioxidants that help so I got looking for other substitutes as acai is very expensive. I realised that cloves are at the top of the list followed by cinnamon! Acai is around 10th! Then I looked up cinnamon and couldnt believe that I had stumbled across an ancient secret! I’ve always loved cinnamon but I cannot believe all the benefits! I now have approx 2tspoons a day and cloves in my tea. I… Read more »
Vote Up
1
Vote Down
k rich
Share On TwitterShare On Google

cinnamon, along with pineapple, can make semen taste more pleasant and slightly sweet. look it up for yourself!

Vote Up
1
Vote Down
EP
Share On TwitterShare On Google

Not just food–cinnamon scent is very soothing, so things like oils or natural airfresheners etc would be great.

Vote Up
3
Vote Down
Todd
Share On TwitterShare On Google

I personally like to add cinnamon and pure honey to plain oatmeal for breakfast.

Vote Up
3
Vote Down
Gerry
Share On TwitterShare On Google

Vote Up
2
Vote Down
Brian A.
Share On TwitterShare On Google

i am opening up a shop that sells nothing but cinnamon products. i need some feed back. the shop is built but i would like to hear views of this store and how people would like it. reply at the email bmallison@cox.net

Vote Up
2
Vote Down
Maya
Share On TwitterShare On Google
Cinnamon is one of my favorite spices to use in cooking! A great way to add flavor to a tuna salad – I know, it doesn’t seem like it would be good, but trust me. I heard about a new book that just come out today – Dr. Dean Ornish’s new book the “Spectrum”. Have you heard about it? There are so many ways to customize your diet based on your needs, but sometimes it’s hard to know what to eat. The Spectrum provides you tools to customize a way of eating, managing stress, and exercising that is based on… Read more »
Vote Up
2
Vote Down