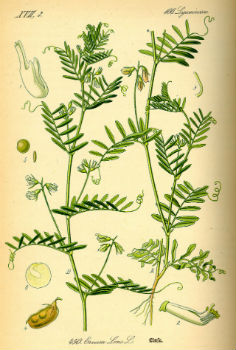 The lentil (Lens ensculenta) is a legume that grows in pods containing one or two lentil seeds.

They are believed to have originated in central Asia.

Lentils have been eaten by humans since Neolithic times and were one of the first domesticated crops.

In the Middle East, lentil seeds have been found dating back more than 8000 years.

In the Old Testament, Esau gives up his birthright to Jacob in exchange for a bowl of lentil soup.

In Judaism, lentils are considered to be a food for mourners because of their round shape symbolizing the circle of life.

Lentils have been found in Egyptian tombs dating as far back as 2400 BC.

In India, the lentil is known as dal or daal.

For many centuries, lentils were considered to be “the poor man’s meat.” In Catholic countries, those who couldn’t afford fish would eat lentils during Lent instead.

In the 18th century, King Louis XV’s wife, Marie Leszczynska, made lentils fashionable among royalty and they were nicknamed “the queen’s lentils.”

There are many different varieties and colors of lentils, including brown, yellow, black, orange, red and green.

Beluga lentils are black and one of the smallest varieties of lentils, having an appearance similar to caviar.

French green lentils are small, delicate, and flavorful and hold their shape after cooking better than many other types of lentil.

The most common lentils used in the United States are green and brown, since these varieties are best at retaining their shape after cooking.

The optical lens is named after the Latin word for lentil, lens.

Unlike most other beans, lentils don’t need to be soaked before cooking.

Lentils and rice is a popular staple dish in many countries, with many variations depending on the region.

In Egypt, one of the national dishes is kushari, a dish made of rice, brown lentils, chickpeas, pasta, garlic, salsa, and vinegar. In fact, many restaurants in Egypt serve nothing but kushari.

In the 1980s British sitcom “The Young Ones,” the character named Neil is a stereotypical hippie who is always eating lentils.

Sort by:   newest | oldest | most voted
Cogiterium
Share On TwitterShare On Google

Lentils are one of my 10 power foods. Great taste, sustained energy, and protein. Great post. Lens and lentils…never knew that.