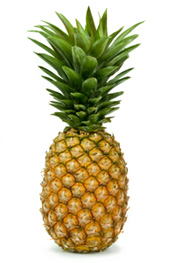 The pineapple is native to Brazil and Paraguay.

The first written record of the word “pineapple” in English was in 1398 and it was used to refer to a pine cone. It comes from the Spanish word for pine cone, “piña.”

Christopher Columbus found pineapples on the Caribbean island of Guadalupe in 1493 and took them back to Spain. The Spanish used the word for pine cone (“piña”) for them because they resembled pine cones.

After Columbus introduced them to Spain, pineapples became popular among sailors as protection against scurvy.

The first pineapple arrived in England in 1660.


In 1694, the term “pine cone” was created to refer to pine cones instead of “pineapple” in order to allow pineapples the sole use of the word.

“Hala kahiki” is the Hawaiian word for pineapple. When Hawaiians first saw the pineapple, they thought it resembled the Hawaiian Hala, so they named it “hala kahiki,” meaning “foreign Hala.”

“The Pineapple King,” James Dole, started his first pineapple plantation in Wahiawa, Hawaii in 1900 and opened his first cannery in 1901.

In 1911, Henry Ginaca invented the Ginaca machine that could peel and core 35 pineapples per minute, making canned pineapple much easier to produce. Before this, each pineapple had to be peeled and cored by hand. Because of this invention, Dole’s pineapple canning business exploded and other pineapple canneries soon adopted the machine.

The Maui Pineapple Company is Hawaii’s biggest pineapple producer. They began operations in Maui in 1909.

In 2006, Del Monte announced that it would cease pineapple production in Oahu by the end of 2008 because they can produce it much cheaper in other parts of the world.

Pineapples take about 18 months to grow.

One cup of pineapple has about 135 calories and 33% of the RDA of Vitamin C.

A pineapple is ripe if one of its top leaves can easily be pulled out.

3 Comments on "20 Facts About Pineapples"

Sort by:   newest | oldest | most voted
charles sawyer
Share On TwitterShare On Google

What fertlizer is the most effective for growing pineapples Thank you

Vote Up
-1
Vote Down
jane
Share On TwitterShare On Google

How true that pineapple has a high fiber?