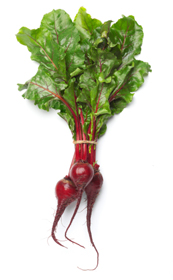 Modern beets are derived from wild sea beets that originated around the coasts of Europe, the Middle East, and Africa.

Around 800 BC, an Assyrian text describes beets growing in the Hanging Gardens of Babylon, one of the wonders of the ancient world.

Beets were an important plant for both the ancient Greeks and Romans. Beets of this period were white or black rather than red. The Roman name for the beet plant was “beta” while the Greeks referred to it as “teutlion.”

At first, the Greeks used just the leaves of the plant, both medicinally and as a culinary herb.

The Romans used the leaves as a culinary herb and as a medicine and they also used the beetroot as medicine before the Greeks began doing so.

By the 3rd century AD, the Romans had begun using the beetroot as food rather than just medicine. They are considered the first to have cultivated the plant for the root rather than just the leaves.

The Greeks presented beets to the sun god Apollo in the temple at Delphi.

Aristophanes mentions beets in two of his comedies, Acharneans and Peace, both of which were performed in 420 BC.

Red beets get their color from a pigment called “betalain.” Betalain is also responsible for the red color of bougainvillea and amaranth.

Pliny the Elder wrote that beets were easily digested but that some doctors believed them to be more harmful to the digestive system than cabbage.

Some Roman physicians believed that beets needed to be boiled twice if one wanted to avoid gas and stomach aches.

The Romans considered beet juice to be an aphrodisiac.

The Romans spread beets throughout the Roman Empire.

In 812 AD, Charlemagne issued a “Regulation concerning landed property” that registered beets as something to be cultivated on the Imperial estates.

Borscht is an Eastern European soup made from beets that has been an important winter staple in countries like Russia and Poland since the 14th century.

In 1975, during the Apollo-Soyuz Test Project, cosmonauts from the USSR’s Soyuz 19 welcomed the Apollo 18 astronauts by preparing a banquet of borscht squeezed from tubes and other treats.

Since the 16th century, beet juice has been used as a natural red dye. It was even used as a hair dye.

The commercial cultivation of sugar beets began in the 19th century in France and Belgium.

Sugar beets are about 20% sugar while beets or beetroot are usually no more than 10% sugar.

In Australia, pickled beets are commonly put on hamburgers.

Some people are susceptible to “beeturia,” the passing of red colored urine and stools after eating beets. Beeturia is harmless but is often mistaken for the dangerous conditions of blood in the urine or stool.

Today there are several varieties of commercially grown beets. The most common variety in the United States is the Red Ace.

One cup of beets contains about 75 calories.