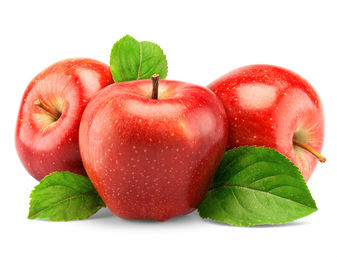 “If you want to make an apple pie from scratch, you must first create the universe.” — Carl Sagan

“Millions saw the apple fall, but Newton was the one who asked why.” — Bernard M. Baruch

“Why not upset the apple cart? If you don’t the apples will rot anyway.” — Frank A. Clark

“We are born believing. A man bears beliefs as a tree bears apples.” — Ralph Waldo Emerson

“Stay me with flagons, comfort me with apples: for I am sick of love.” — Song of Solomon 2:5

“Even if I knew that tomorrow the world would go to pieces, I would still plant my apple tree.” — Martin Luther

“Did perpetual happiness in the Garden of Eden maybe get so boring that eating the apple was justified?” — Chuck Palahniuk

“The sweeter the apple, the blacker the core. Scratch a lover and find a foe!” — Dorothy Parker

“When the apple is ripe it will fall.” — Irish proverb

“Ever since Eve started it all by offering Adam the apple, woman’s punishment has been to supply a man with food then suffer the consequences when it disagrees with him.” — Helen Rowland

“Good apple pies are a considerable part of our domestic happiness.” — Jane Austen

“In Hollywood, the women are all peaches. It makes one long for an apple occasionally.” — William Somerset Maugham

“The revolution is not an apple that falls when it is ripe. You have to make it fall.” — Che Guevara

“I tell you, all politics is apple sauce.” — Will Rogers

“Almost all wild apples are handsome. They cannot be too gnarly and crabbed and rusty to look at. The gnarliest will have some redeeming traits even to the eye.” — Henry David Thoreau, Wild Apples

“From my experience with wild apples, I can understand that there may be reason for a savage’s preferring many kinds of food which the civilized man rejects. The former has the palate of an outdoor man. It takes a savage or wild taste to appreciate a wild fruit.” — Henry David Thoreau, Wild Apples

“Surely the apple is the noblest of fruits.” — Henry David Thoreau, Wild Apples

“It is remarkable how closely the history of the Apple-tree is connected with that of man.” — Henry David Thoreau, Wild Apples

“The flowers of the apple are perhaps the most beautiful of any tree’s, so copious and so delicious to both sight and scent.” — Henry David Thoreau, Wild Apples

“What a healthy out-of-door appetite it takes to relish the apple of life, the apple of the world, then!” — Henry David Thoreau, Wild Apples

“Thy breath is like the steame of apple-pyes.” Robert Greene (1590), Arcadia

“Pessimism is as American as apple pie – frozen apple pie with a slice of processed cheese.” — George Will

“My dear, since Eve picked the apple no woman’s ever been taken entirely unawares…. When a woman’s kissed it’s because, deep down, she wants to be kissed.” — Philip Dunne

“Why do we need so many kinds of apples? Because there are so many folks. A person has a right to gratify his legitimate taste. If he wants twenty or forty kinds of apples for his personal use…he should be accorded the privilege. There is merit in variety itself. It provides more contact with life, and leads away from uniformity and monotony.” — Liberty Hyde Baily