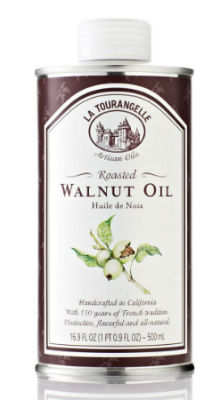 Walnut oil is one of the healthiest oils you can use. It’s best used cold in salad dressings and other cold preparation since the oil and its benefits degrade when heated. It’s harder to find in stores than other oils like olive oil or coconut oil but that’s where the Internet comes in handy. Here are the 3 best walnut oils according to user reviews on Amazon.

. It is made from California walnuts and won the gold medal at the 2006 French food competition, Le Concours General Agricole. The walnuts are hand roasted and then expeller pressed.

. It is pressed from walnuts in the Auvergne region of France.

Reviews say: “love this,” “my favorite,” and “consistently mild.”

Third on the list is Jean LeBlanc French Walnut Oil

. This oil is imported from France, stone cold pressed, and based on a traditional European recipe.

There is only one review of this one. The reviewer said that it was “light” and had a “great flavor.”