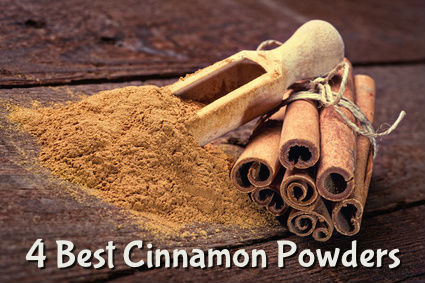 Not all cinnamon powder is created equal. For starters, you want to make sure you’re getting true cinnamon or Ceylon cinnamon and not cassia or Saigon cinnamon, which is often sold as cinnamon but is a bit different in terms of health benefits. Most importantly, cassia contains higher levels of coumarin which, in large doses, may have serious side effects such as blood thinning and kidney and liver problems. Many organic cinnamon powders are actually cassia or Chinese cinnamon.

Here are the 4 best cinnamon powders according to reviews on Amazon. All four of these are Ceylon cinnamon and not cassia.

. It is lab tested for quality, 100% USDA certified organic, and has no additives. It comes in a convenient 1 lb jar for easy scooping. If you’re looking for real Ceylon cinnamon sticks, they also sell Organic Real Ceylon Cinnamon Sticks

. This one is great if you want to take cinnamon while traveling or going out to dinner or on errands because it’s a tin filled with 12 one teaspoon packets of true Ceylon cinnamon. If you’re taking cinnamon for health reasons, this makes it easy to take your cinnamon with you wherever you go. This makes a great gift, too.

Fourth on the list is Whole Spice Ceylon Cinnamon Powder

i got publix store brand cinnamon with my coffee today and didn’t add any sugar. it was delicious. thumbs up!!!!!!!!!

Vote Up
0
Vote Down
a.g.
Share On TwitterShare On Google

Many organic cinnamon powders are actually cassia or Chinese cinnamon.