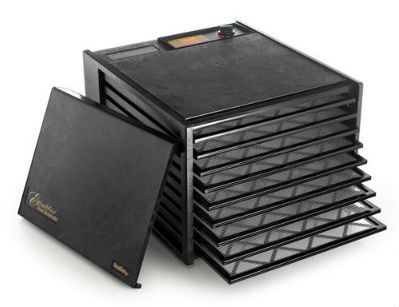 If you want to be healthy, a dehydrator is an essential kitchen item. It doesn’t matter if you’re a raw foodist, a lacto-vegetarian, a paleo, a low carber, or anything in between. Dehydrating food is tasty, saves money, and is fun for the whole family. You can dehydrate leftover fruits and vegetables that you’ve grown in your garden, make healthy jerky out of organic meat, homemade fruit rolls, dried herbs, dried flowers, and delicious raw food treats.

Here are the 5 best food dehydrators according to reviewers on Amazon. Which one you choose will depend on how much food you’re planning to dehydrate and how much you want to spend.

gets the highest ratings from reviewers. Its features include adjustible thermostat, top-mounted fan, fast drying times, and the ability to expand it from four trays to eight trays.

Reviewers liked that it was American-made and also said: “easy to clean,” “runs quiet,” and “great price.”

comes in second on the list. It comes with five drying trays, two fruit roll sheets, and it is expandable to 12 trays.

is third on the list and features 9 trays with 15 square feet of drying space. It is 600 watts and has an adjustible thermostat between 85 and 145 degrees fahrenheit. This is the dehydrator that I own and I really like it. It’s quiet and dries all levels uniformly. I’ve had it for years and it still works great. The trays are much bigger than the smaller, round dehydrators and they’re great if you have a lot to dehydrate.

is rated fourth best by reviewers. It has 10 trays, 10 square deet of dehydrating space, and an adjustible thermostate from 85 to 155 degrees fahrenheit.

Reviewers say that is is “very quiet,” “efficient,” “inexpensive,” and “awesome.” Several people commented that it has similar (if not better) features to the Excalibur but at a much lower price.

. It has 500 watts and an adjustible thermostat.

Reviewers said that it was “top notch for the money,” “a good buy,” “worth it,” and “simple to use.”

Sort by:   newest | oldest | most voted
Jamie
Share On TwitterShare On Google

I think the excalibur is by far the best dehydrator on the market. I use mine every week and couldn’t live without it! The nesco doesn’t compare. I’m going to dehydrate apples tomorrow. Mmmm