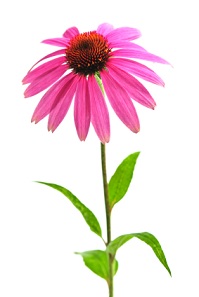 Echinacea is a genus of flower in the daisy family, often called purple coneflowers. Endemic to North America, this natural herb was first used by Native American plains Indians to treat coughs, sore throats and other symptoms often associated with the common cold. It gained popularity in Europe and America in the 1930s.

Here are 6 health benefits of echinacea:

Immune System Support
Echinacea promotes the production of white blood cells, which work to get rid of viruses and bacteria inside the body while strengthening the immune system.

Skin Health
Applied topically, echinacea may help treat the symptoms of a number of skin conditions, including psoriasis and eczema.

Wound Treatment
Echinacea can expedite the healing of cuts, abrasions and various types of skin rash. It may also soothe insect bites and relieve the painful effects of hemorrhoids.

Fights Infection
The immune system boosting powers of echinacea also make this herb great for fighting all kinds of infections, particularly internal infections such as digestive tract or yeast infections. It has been specifically noted to stave off bronchitis, candida and herpes.

Allergy Relief
Echinacea is considered a homeopathic remedy for allergy relief from the irritating effects of pollen.

Cancer Treatment
Even though it is a controversial treatment, echinacea has been used to treat cancer. It is thought that the boost in the immune system can help the body to fight cancer cells and prevent them from spreading to other organs. At this time there is little scientific evidence to support this theory.