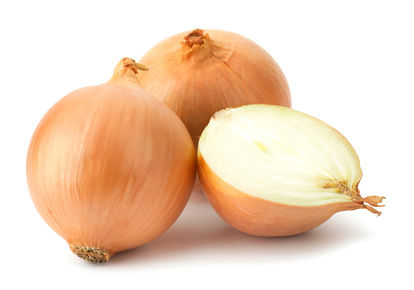 Onions have been enjoyed for their nutritional value and flavor for millennia. The workers who built the pyramids were fed onions and pharaohs were buried with them. Believing in the onion’s benefits to the blood, the Greeks ate large quantities and Roman gladiators were rubbed down with onion to firm their muscles. In the Middle Ages, onions were used to pay the rent and were even given as gifts. Here are six health benefits of onions.

Bone Support
Studies have shown that the copper content in onion increases bone density and could particularly benefit women of menopausal age experiencing bone loss. There is also evidence to suggest that the risk of hip fracture in menopausal women may be lowered through frequent onion consumption.

Anti-Cancer
Another of the many health benefits of onions is that they have repeatedly been shown to lower the risk of colorectal cancer, laryngeal cancer, oral cancer, esophageal cancer, and ovarian cancer even when consumed even in modest amounts such as 1/2 cup of onion per day.

Cardiovascular Health
Evidence exists to show that onion’s sulfur compounds may have an anti-clotting effect and may help prevent the undesirable coagulation of blood platelet cells. Further evidence shows that sulfur compounds in onion can lower cholesterol and triglycerides levels in the blood, and advance the function of cell membranes in red blood cells.

Antibacterial
Hand in hand with its sulfur-containing compounds, the flavonoid quercetin in onion assists in providing antibacterial benefits. Studies show onion aids in resistance to the bacteria Streptococcus mutans and Streptococcus sobrinus (commonly associated with tooth cavities). Onion also supports resistance to bacteria that cause gum disease, including Porphyromonas gingivalis and Prevotella intermedia.