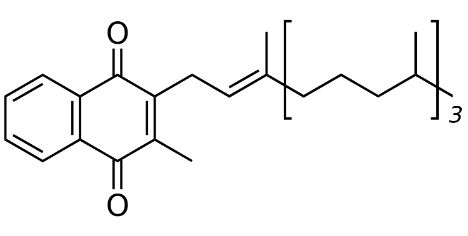 
Blood Clotting
Vitamin K is an essential part of glumatic acid, an amino acid that causes the chemical event called carboxylation. This chemical event allows the blood from an open wound to stick to the nearby tissue, thus clotting the open wound and preventing an excess of blood from flowing out. Nose bleeding, heavy menstrual bleeding, easy bruising, hemorrhaging and anemia are just some of the indications that a person is vitamin K deficient.

Bone Health
Vitamin K ensures healthy bones by two means. Firstly, vitamin K blocks the formation of too many osteoclasts, or bone cells, that take minerals from the bones and make them available to other bodily functions (a process called demineralization). The formation of osteoclasts, if not properly checked, can leave bones overly depleted of their minerals.

Secondly, a protein found in bones that is directly related to our bone mineral density, called osteocalcin, must be chemically altered through carboxylation (the process mentioned above in regards to blood clotting) to maintain optimal health. As shown, vitamin K is a key ingredient in carboxylation, and with proper intake can allow the protein osteocalcin to strengthen the health and composition of our bones.

Calcification
The build-up of calcium inside tissue, or calcification, can become a serious problem that may lead to cardiovascular disease. Vitamin K helps prevent calcification by contributing to the process (mentioned again) called carboxylation. This process produces the matrix Gla protein (MGP) that directly prevents calcium from forming in tissue. Without a proper supply of vitamin K, and thus MGP, the body is at greater risk of atherosclerosis, cardiovascular disease, and stroke.

Antioxidant
Though vitamin K has not been shown to be an antioxidant in the same sense as vitamin C and E, the basic forms of vitamin K, including phylloquinones and menaquinones, have been shown to protect cells from oxidative stress.

Anti-Inflammatory
Healthy vitamin K levels have been shown to significantly lower the release of the glycoprotein interleukin-6, a marker of inflammation within the body.

Brain Function
The myelin sheath, or the outer wrapping around a nerve, needs sphingolipids (a crucial fat) to form properly. Vitamin K is known to be essential for the synthesis of the sphingolipids, and therefore proper brain and nervous function.