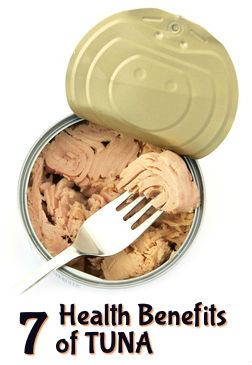 Tuna is an incredibly nutrient-dense food. It’s rich in high quality protein and an excellent source of important nutrients such as the minerals selenium, magnesium, and potassium; not to mention the B vitamin complex, and of course, the marvelous omega-3 essential fatty acids.

Cardiovascular Health
The omega-3 fatty acids in tuna are responsible for a long list of cardiovascular benefits. Omega-3s help the cardiovascular system by aiding in the prevention of irregular heart rhythms, making blood clots less likely, and improving the ratio of good (HDL) cholesterol to potentially harmful (LDL) cholesterol. Not to mention, omega-3s reduce inflammation, and thereby the conversion of cholesterol into artery-clogging plaques.

That’s not all: by facilitating greater variability between heartbeats, the omega 3 fatty acids reduce the risk of arrhythmia and/or sudden death.

Through its high levels of omega-3s, tuna lowers levels of triglycerides, high amounts of which are associated with an increased risk of cardiovascular disease. Omega-3 fatty polyunsaturated fatty acids help prevent and control high blood pressure and may reduce risk of atrial fibrillation, the most common type of heart arrhythmia, especially in the elderly.

Eye Health
The high levels of omega-3 essential fatty acids in tuna offer substantial protection against macular degeneration (AMD) of the eye, a condition in which fine vision deteriorates, resulting in central vision loss and is the leading cause of blindness in people over 50. Studies strongly suggest that increasing dietary intake of omega-3 fatty acids may also reduce the risk of dry eye syndrome, an important and prevalent cause of ocular complaints.

Cancer Prevention
Studies suggest tuna protects against cancer in the ovaries, pancreas, and every part of the digestive tract including the mouth, pharynx, esophagus, stomach, and colon. Eating fish rich in omega-3 fatty acids, such as tuna, may also help protect against breast cancer and lower the risk of leukemia, multiple myeloma, and non-hodgkins lymphoma. Consumption of fatty fish, such as tuna, presents substantial protection against renal cell carcinoma, the most common form of kidney cancer.

Cognitive Benefits
Omega-3 fatty acids may help lessen cognitive decline and Alzheimer’s disease by promoting a healthy blood supply to the brain and lowering inflammation, aiding the transmission of electrical signals in the brain, and reducing the types of lesions so commonly found in patients suffering the ravages of Alzheimer’s.

Brain cell research shows one omega-3 fatty acid named DHA may help increase production of the protein LR11, which destroys the beta-amyloid plaques associated with Alzheimer’s disease. Tuna’s rich content of niacin may also help provide protection against age-related mental decline and Alzheimer’s disease. Research has shown people with diets rich in niacin are 70% less likely to have developed Alzheimer’s disease than those who suffer a deficiency, and their level of age-related cognitive decline is also less.

Mood Lifter
A diet high in tuna may improve your mood and save you stress. The EPA of Omega-3 fatty acids improves flow of blood and may affect both hormones and the immune system, each of which have an important effect on brain function. DHA is used in ion channels in the brain, helping transmit electrical signals, and is involved in serotonin metabolism, a key factor in depression.

Improved Insulin Response
Tuna is of particular benefit to people who suffer from type 2 diabetes, due to its high content of omega-3 fats. Research suggests that although saturated fats promote weight gain, the omega-3 fats found in tuna reduce the chances of becoming obese along with improving the ability of the body to respond to insulin. The reason for this marvelous ability is the omega 3 fatty acid known as EPA, which stimulates the secretion of the hormone leptin, thereby regulating body weight and metabolism.

Promotes Detoxification
Along with its omega-3s, the selenium contained in tuna is a crucial element in the production of glutathione peroxidase. This important antioxidant is critical for a healthy liver, the organ responsible for detoxifying and ridding the body of harmful compounds like pesticides, drugs, and heavy metals. Selenium is also known to help prevent cancer and heart disease.