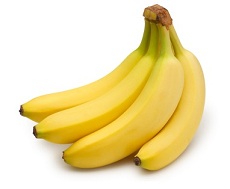 Banana, the once-exotic fruit, has found its way into our daily lives. Whether sliced over cereal or blended in a smoothie, here are eight health benefits of bananas.

Diet
One banana has 11% of the RDA of dietary ﬁber and only about 108 calories. The ﬁber in bananas not only keeps digestion regular, but also helps maintain low blood sugar and curbs overeating.


Lower Blood Pressure
Studies show that the high amounts of potassium in bananas (over 13% of the RDA) can lower one’s blood pressure, which in turn lessens the possibility of atherosclerosis, heart attack and stroke.

Bone Health
Along with lowering blood pressure, potassium prevents the weakening of the body’s bones. A high sodium intake, which is typical of many American diets, can cause excessive amount of calcium to be lost through the urine, which threatens not only the strength and general health of the bones, but also negatively affects blood clotting, proper muscle contraction, and normal nervous system function. The potassium found in bananas neutralizes the high amounts of sodium in one’s diet, thus allowing for healthy amounts of calcium to remain within the body.

High Nutrient Absorption
The potassium in bananas is not the only means to ensure healthy levels of calcium in the body. Bananas also contain high levels of fructooligosaccharide (FOS) that–along with insulin–promotes calcium absorption. FOS further nourishes healthy bacteria in the colon that manufacture vitamins and digestive enzymes that boost the body’s overall ability to absorb nutrients.

Healthy Digestive Tract
Bananas can diminish the uncomfortable effects of diarrhea and constipation. The high amounts of potassium in bananas can restock electrolytes that are easily depleted when suffering from diarrhea — potassium being an important electrolyte itself. Furthermore, bananas can relieve the body from constipation and help restore regular digestion with pectin, a soluble polysaccharide that helps normalize the digestive tract.

Rugged Gut
Bananas protect the healthy constitution of the stomach in two ways. Firstly, they trigger the production of mucus in the stomach, which provides a protective barrier against stomach acids. Secondly, bananas possess protease inhibitors, a substance that breaks down bacteria in the stomach that cause ulcers. (Moreover, protease inhibitor also obstruct the replication of certain cells and viruses, including HIV.)

Cancer Prevention
A large study by the Internal Journal of Cancer illustrates that the probability of developing kidney cancer is greatly lessened by frequent consumption of fruits and vegetables, though especially bananas. For instance, the probability of developing kidney cancer in female subjects decreased by 50% when eating bananas four to six times a week.

Vitamin B6
One banana has an impressive 34% of the RDA of vitamin B6, which serves many important roles in the body’s health. For example, the B6 in bananas acts as an anti-inﬂammatory agent that helps ward off cardiovascular disease, type II diabetes, as well as obesity. B6 also contributes to the maintenance of the lymphoid glands that ensure the production of healthy white blood cells that protect the body from infection. Finally, the vitamin B6 in bananas plays a pivotal part in cell formation and proper nervous system function, making one banana a day a healthy and delicious choice.