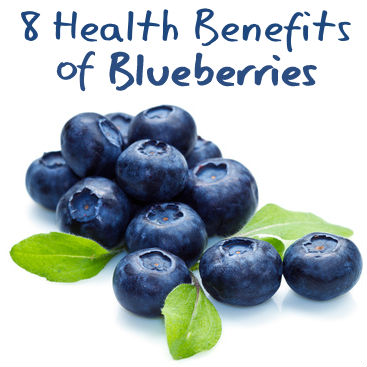 Blueberries are not only delicious but they’re really good for you, too. Here are 8 health benefits of blueberries.


Hepatitis C
Studies have found that a chemical in blueberry leaves can slow the progression of disease in people infected with hepatitis C.

Heart Disease
The antioxidants and many other wonderful properties of blueberries all contribute to a stronger heart and cardiovascular function.

Urinary Tract Infections
Studies have found blueberries to be potentially helpful in preventing urinary tract infections by inhibiting the growth of the bacteria that cause these infections.

Cholesterol
Studies in mice have found that a compound in blueberries lowers cholesterol as effectively as statin drugs but without the side effects.

Antioxidants
Blueberries are full of antioxidants and phytochemicals that help prevent disease, including anthocyanins, a potent antioxidant that helps to reduce inflammation.