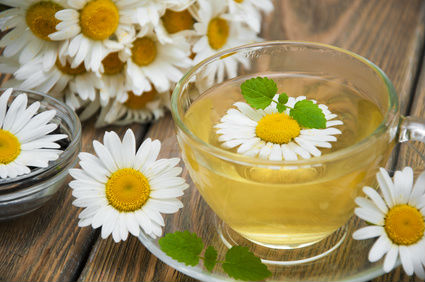 Chamomile tea has been consumed for hundreds of years. It is made by infusing German chamomile (Matricaria recutita), a member of the sunflower family, in hot water. Roman chamomile (Chamaemelum nobile) is also beneficial, but most research has been done on German chamomile and it is the most commonly used in teas.

Better Sleep
Chamomile tea’s most well-known benefit is as a sleep aid. It is known for its relaxing and soothing properties and is often taken before bed to promote restful sleep.

Stomach Soother
Peter Rabbit’s mother was right to give him chamomile after he ate too much in Mr. McGregor’s vegetable garden. Chamomile is helpful for a variety of stomach problems. It soothes stomach aches, eases the symptoms of irritable bowel syndrome, promotes elimination, and assists in overall digestion. It is often found in teas for digestion in combination with peppermint.

Hemmorrhoid Help
One study found that chamomile ointment was helpful in the treatment of hemorrhoids.

Cold Fighter
Chamomile has immune boosting properties and helps in the fight against colds due to its antibacterial properties.

Wound Healing
The Egyptians, Romans, and Greeks used chamomile flowers in a poultice and applied them to wounds to speed healing. They must’ve been on to something. In one study, rats given chamomile extract in their water experienced faster wound healing times.

Diabetes Management
Chamomile tea is being studied for its beneficial effects in the management of diabetes. In one study, daily consumption of chamomile tea was found to prevent the progression of diabetic complications and hyperglycemia.

Precautions
Some people have serious allergic reactions (including anaphylaxis) to chamomile. If you are allergic to other plants in the same family such as daisy, ragweed, aster, chrysanthemum, or marigold you should use caution when using chamomile.

Chamomile should be avoided during pregnancy because it may act as a uterine stimulant and therefore increase the chance of abortion.

People with bleeding disorders or on blood thinners should avoid chamomile, as it contains coumarin and may increase the chance of bleeding.

. The Stash Tea Company is based in Portland, Oregon and gets their chamomile from Egypt.

Sort by:   newest | oldest | most voted
Kent Dzurick
Share On TwitterShare On Google

Is it safe for people with acid indigestion problems?

Vote Up
-1
Vote Down
Jamu
Share On TwitterShare On Google

Can we use chamomile to cure mouth ulcer? Since it can help to heal wound faster, I wonder if it can heal mouth ulcer as well.

I love these tea recipes. I am doing a 6 month RAW food diet but herbal teas are allowed, then blogging and recording the results on my health- without supplements I rely on good herbal teas.

Vote Up
1
Vote Down
Steve
Share On TwitterShare On Google

I’m glad you mentioned Irritable Bowel Syndrome as I suffer from this and I find Chamomile tea helps greatly.

Vote Up
2
Vote Down
Jarred
Share On TwitterShare On Google

Chamomile Tea is wonderful, I drink it as much as possible of obviously there are limitations, I used to use fruit drinks but I found they were too high in sugar. Recently I found a carbonated drink called Kristian Regále. Usually I purchase it at my local grocer but if I’m looking to stock up I head over to IKEA who carries all of their varieties. I mix this with some fresh fruit and sometimes some low fat yogurt for a great, healthy smoothie.

I have been drinking all types of tea including Chamomile Tea for as long as I can remember. Up until recently I have not had success getting my husband to drink tea at all. Now that he is drinking a cup with me every evening I am going to try and introduce him to some of the many varietes available. Wish me luck.