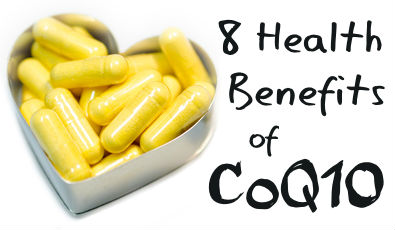 Coenzyme Q10 or CoQ10 is necessary for the functioning of the human body, which produces it naturally. Certain diseases and aging have been associated with lower CoQ10 levels. Supplementation with CoQ10 has shown promise and is being studied for its benefits for many different diseases and conditions.

Heart Health
There is evidence of CoQ10 deficiency in people with congestive heart failure. In fact, low levels of CoQ10 in plasma concentrations is a predictor of poor prognosis in those with congestive heart failure. CoQ10 given to people who’ve had heart attacks within three days of the attack may be beneficial according to preliminary research. Also, some studies have found that CoQ10 supplementation after heart surgery may improve heart function.

Anti-Aging
In animal studies, CoQ10 has been found to prevent the breakdown of mitochondrial DNA that leads to aging.

Cancer Prevention
Research has found that CoQ10 may help the body resist cancer and may prevent cancer cells from growing.

Chemotherapy Protection
A study in Italy found that cancer patients who took CoQ10 alongside chemotherapy treatment had less damage to their hearts than those who took chemotherapy alone.

Parkinson’s Disease
A study of 80 people with Parkinson’s disease found that 1200 mg of CoQ10 per day reduced the progression of the disease by 44%. Because the results were so promising, trials are still ongoing on the benefits of CoQ10 and Parkinson’s.

Radiation Protection
One study in rats found that supplementation with CoQ10 reduced radiation damage to the blood.

Gum Disease
Gum tissue with periodontal disease has been found to be deficient in CoQ10. Studies in humans have shown a positive link between oral administration or topical application to the gums of CoQ10 and improved gum health and even reversal of gum disease.

Migraines
Swiss researchers found that 100mg of CoQ10 taken three times per day reduced the average migraines in patients from 4.4 per month to 3.2 per month and reduced the number of days patients suffered with migraines and accompanying nausea.