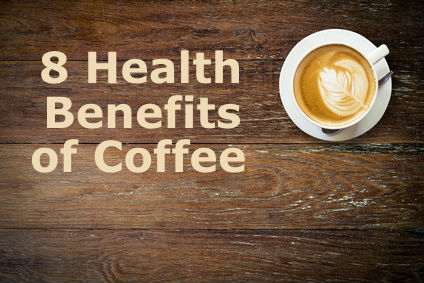 The average American drinks nearly 600 cups of coffee per year but the United States ranks only 25th in the world for coffee consumption. As it turns out, moderate to heavy coffee consumption may help prevent disease. Here are 8 health benefits of coffee:

Skin Cancer Prevention
Research from the American Association for Cancer Research has connected coffee with the prevention of basal cell carcinoma, the most common cancer in the world. A study conducted at Harvard Medical School showed that women who drank three or more cups per day had a 20% lower chance of developing skin cancer. Men had a reduced risk of 9%.

Liver Protection
Coffee consumption has been known to help protect the liver from cirrhosis and related forms of cancer. According to a professor at the Harvard School for Public Health, the evidence for cancer prevention in the liver is very promising and consistent from study to study.

Type 2 Diabetes
Minerals like magnesium and chromium, found in coffee, help the body use insulin, which helps regulate blood sugar levels effectively. According to a review of studies published in Archives of Internal Medicine, coffee consumption can help lower the risk of type two diabetes. The 18 studies involved 450,000 people. For each additional cup of coffee consumed per day, the risk was lowered by 7%. Another study involving 193,000 people showed a reduction of risk of 35% in people drinking 6 or 7 cups of coffee per day.

Energy Booster
The caffeine in coffee can offer a strong, temporary boost in a person’s energy level and alertness. However, increased consumption of caffeinated beverages can alter a person’s tolerance to caffeine, meaning more coffee is needed to produce the same boost in energy. Too much caffeine can be a risk to one’s health and coffee taken for energy should be taken in moderation.

Depression Treatment
Studies have found that women who drink at least two cups of coffee per day may be less likely to develop severe depression than those that drink coffee moderately or not at all. A study at the Harvard Medical School spanning one decade and involving 2,600 women showed that woman who drank four or more cups per day had a 20% lower risk of developing depression.