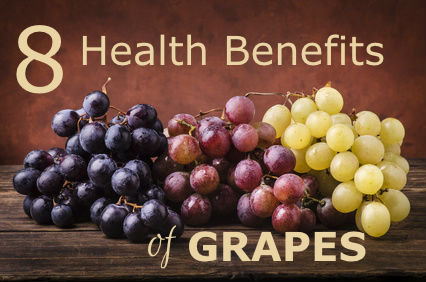 It seems our commonplace grapes were cultivated in Asia as early as 5000 BC. It wasn’t long before they made their way into the Mediterranean world, featuring in Egyptian hieroglyphics, often mentioned in the Bible, and enjoyed sometimes to excess by the Greeks and Romans.

Grapes were first cultivated in the United States by Spanish missionaries in 17th century New Mexico. They soon made their way to California where the climate suits them very well. As scientists investigate the health benefits of polyphenolic compounds found in grapes, this oft-venerated fruit is once again enjoying the spotlight. Italy, France, Spain, the United States, Mexico and Chile are among the world’s largest grape producers.


Cardiovascular Benefits
Grapes increase levels of nitric oxide in the blood, preventing blood clots and lowering the chances of heart attack. In addition, antioxidants present in grapes known as polyphenols prevent the oxidation of LDL cholesterol, which blocks the blood vessels, causing heart attacks and strokes. One polyphenol in grapes called resveratrol protects against arterial wall damage. Another fascinating nutrient in grapes is pterostilbene. Researchers have discovered this compound can reduce cholesterol and triglyceride levels by influencing enzymes responsible for the regulation of fat level in our blood.

Saponins are an interesting compound located in grape skins. They bind with cholesterol, preventing its absorption into the body. They also seem to alleviate inflammation. Grapes also contain an antioxidant called alpha-tocopherol, a compound that may increase blood antioxidant activity by 50%.

Cancer Prevention
Grapes don’t just lower the risk of developing cancer, but also suppress the growth and spread of cancerous cells. The anti-inflammatory effect of the resveratrol present in grapes is particularly effective in preventing liver, lung, breast, prostate, colorectal cancer and breast cancer. Anthocyanins and proanthocyanidins in grapes can inhibit the diffusion of cancer causing agents. They contain high levels of caffeic acid, a potent cancer-fighting compound. Bioflavonoids, another nutrient contained by grapes, function as antioxidants, by protecting vitamin C from oxidation and preventing capillaries from rupturing. Bioflavonoids provide strength to our cells to win in the struggle against cancer.

Antibacterial and Antiviral Properties
Red grapes have strong antibacterial and antiviral properties to help protect against many infections, including poliovirus and herpes simplex virus. Researchers have discovered that an agent made from grape pumice extract (grape seeds, skin and stems) is an effective antimicrobial agent. Scientists have also found considerable antimicrobial powers against staph and the E. coli. In cases of food poisoning, commonly used antibiotics destroy the body’s health-promoting intestinal bacteria along with the bad, but red wines inhibit food borne pathogens without harming beneficial probiotic bacteria.

Another polyphenol contained by grapes called tannin is absorbed in the intestinal tract, where it is most effective in fighting viruses.

Anti-Aging
The rsveratrol compound in grapes also seems to influence genes controlling the aging process.
According to researchers, resveratrol can activate Sir2, an enzyme able to extend life span in many species when on calorie-restricted diets. The Sir2 enzyme is a member of a family of molecules called sirtuins, which regulate cell maturation and programmed cell death, or apoptosis. It is not established how we might benefit from all this, but it is suggested that a glass of grape juice or red wine may do us some good!

Lung Health
Studies have found that resveratrol has anti-inflammatory effects on the cells of the lungs and nasal passages. It blocks the release of a number of inflammatory molecules and inhibits the production of COX-2 in these epithelial cells. COX-2 is a pro-inflammatory compound whose production the anti-inflammatory drugs Vioxx and Celebrex were developed to stem. These drugs are now being taken off the market due to the increased risk of heart attack and death associated with their use, while resveratrol’s anti-inflammatory benefits represent no such risks.

Brain and Nervous System
The resveratrol present in grapes reduces the levels of detrimental amyloidal-beta peptides in Alzheimer’s disease patients. Studies also suggest that grapes can enhance brain health and stall the onset of other neurodegenerative diseases.

More Energy
White grapes replenish the iron content present in the body and prevent fatigue, though red grapes might have the opposite effect. The antioxidants in grapes also provide a valued lift to your immune system.

Eye Health
Grapes can prevent the age related loss of vision or macular degeneration. Flavonoids present in grapes contain antioxidants that can reduce the chances of developing cataracts and can lower the risks of macular degeneration by over thirty percent.