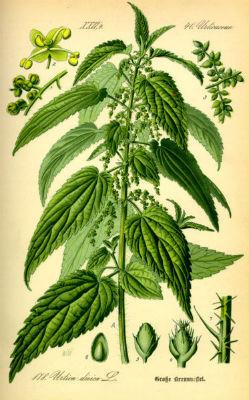 Stinging nettle is so-called because of the short hairs on its stalk and under its leaves that sting you. The sting of the nettle causes an allergic reaction and may cause a painful rash. The hairs inject several chemicals and compounds into the skin. One of these is formic acid, the same thing that’s in ant and bee stings.

However, other compounds in the nettle’s sting, such as serotonin and histamine, have medicinal properties, which is what makes stinging nettle one of nature’s most valuable plants.

Benign Prostatic Hyperplasia
Stinging nettle has been found to be an effective treatment for benign prostatic hyperplasia (BPH), a type of enlargement of the prostate. In human trials, nettle used alone and alongside other herbs, alleviated symptoms better than the placebo. Studies have also found that nettle works just as well as the prescription drug finasteride in treating BPH but without the unwanted side effects of the finasteride.

Anti-Inflammatory
Stinging nettle has been found to contain compounds that reduce the inflammatory response in the body by blocking cytokines. For this reason, it is often used as a natural remedy for disorders that are caused by chronic inflammation.


Arthritis
Nettle is believed to help with arthritis because of its anti-inflammatory properties as mentioned above. Research has found that an old folk remedy called urtication really does work. Urtication involves pricking the skin with stinging nettles in order to an inflammatory response, which in turn provides temporary relief from joint pain. The researchers believe that one of the reasons it may work is because the needles inject pain-blocking neurotransmitters into the skin.

Allergy Treatment
One study found that nettle alleviated the symptoms of hay fever thanks to its natural antihistamine properties. Some people say it helps to reduce the symptoms of poison oak or ivy, which is a severe type of allergic reaction. It can be taken internally as a tea for seasonal allergies or externally for allergic rashes like poison oak/ivy.

Diuretic
Nettle has diurectic properties and has been used to treat water retention since medieval times.

Nutrient Dense
Along with all of the above health benefits of stinging nettle, it is also high in vitamins and minerals, including vitamin C, vitamin E, beta-carotene, potassium, iron, chlorophyll, and zinc. If you have access to fresh nettle leaves, you can use them in cooking in place of other greens in recipes like pesto and lasagna.

See Side Effects of Stinging Nettle to read about possible side effects or contraindications.