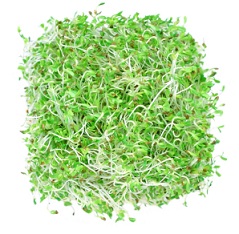 Alfalfa sprouts are the most common type of sprout used in restaurants and sprouted at home. They are most often used in sandwiches and salads but they can also be juiced or blended into smoothies.


Lower Cholesterol
Alfalfa sprouts are a great source of saponins, which are believed to lower levels of bad cholesterol while maintaining good HDL fats.

Heart Health
Along with the heart benefits associated with reduced cholesterol levels, saponins are thought to reduce inflammation, which is believed to help prevent artheroslerosis (hardening of the arteries) and other cardiovascular disease.

Anti-Inflammatory
Saponions also have anti-inflammatory properties that may help prevent stroke, reduce the painful effects of arthritis, and help in other chronic inflammatory disorders.

High In Antioxidants
Alfalfa sprouts are considered to be one of the highest producers of antioxidants of all vegetables. Antioxidants are believed to boost the immune system and effectively combat free radicals, which are associated with lower rates of cancer, heart disease, and stroke.

Immune System Booster
Saponins may stimulate the immune system by increasing the activity of natural killer cells such as T-lymphocytes and interferon.

Weight Loss
Rich in fiber and protein, but low in calories, alfalfa sprouts are a good alternative to fatty foods and may aid in efforts to lose weight.

Bone Health
The plant estrogens found in sprouts may increase bone formation and density while helping to prevent osteoporosis.

Blood Sugar Control
The small reduction of blood sugar levels documented by studies suggest that consuming alfalfa sprouts may help to treat diabetes, however more research is needed to substantiate this argument.