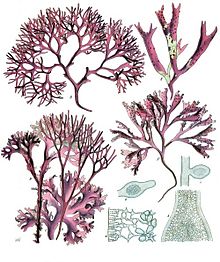 Irish moss, or Chondrus crispus, is not a moss at all, but a type of red algae that grows predominantly amongst the rocky shores of the Atlantic Ocean. It is often used as a food thickener, where it is turned into carageenan for use in food products, and sometimes in brewing beer. It has been used in traditional Irish folklore and has recently gained popularity, especially in the raw food movement, for its nutritional benefits. Irish moss is believed to contain 15 of the 18 essential vitamins and minerals that make up the human body, including good amounts of vitamin A, E, D, F & K as well as calcium, sulphur and potassium. Here are 9 health benefits of Irish moss:

Skin Health
Irish moss is most often found in skin creams and cleansers. The many essential vitamins obtained from Irish moss, especially vitamin A, vitamin E and vitamin K, have superb effects on the skin. Irish moss products can help to soften the skin, reduce wrinkles and treat skin conditions like eczema and psoriasis.

Anti-Viral
Irish moss is believed by many to be an effective anti-viral. It has been used to treat many symptoms of the common cold, influenza, and the mumps virus.

Upper Respiratory Support
Irish moss appears to be effective against upper respiratory problems like bronchitis and coughs. This is likely proof of its anti-viral properties in action.


Disease Recovery
Irish moss has proven to be a great aid to individuals recovering from disease and illness. The many essential vitamins and minerals are thought to replenish the body and support the immune system when in recovery. It may be particularly useful alongside radiation therapy and may help curb some of the side effects. This is likely due in part to its iodine content.

Antioxidants
Irish moss contains several antioxidants that may be helpful in preventing free radical damage in the body and lessening the risk of many types of cancer and disease. These antioxidants include the powerful vitamins A, E and K.


Heart Health
Irish moss is believed to help lower LDL cholesterol levels. It may also help inhibit arteriosclerosis, also known as hardening of the arteries. Concrete studies are needed to prove the connection between Irish moss and improved cardiovascular health.

High in Iodine
Irish moss contains a significant amount of iodine. Iodine helps to curb the effects of radiation poisoning. The iodine in Irish moss may also help with thyroid function, cancer prevention, and recovery from cancer treatment that involves radiation.

Weight Loss
Some say that consuming Irish moss is an effective way to prevent obesity. More studies are needed to confirm the connection between Irish moss and weight loss. However, it is a low calorie, nutrient dense food that appears to be a great addition to an effective weight loss program.