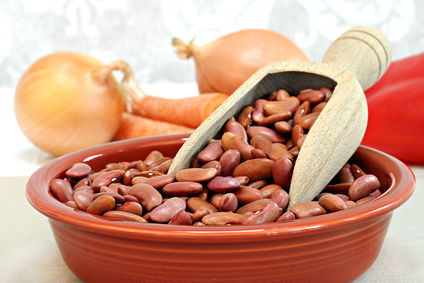 Probably originating in Peru, but found throughout Central and South America by the time the Spanish arrived, kidney beans have become a popular food all over the world due to their savory texture and ability to absorb flavors. They are dark red in color, and as the name might convey, shaped rather like a kidney. Today the world’s biggest producers of kidney beans are India, China Indonesia, Brazil and the US.

Here are nine health benefits of kidney beans that may make you want to include them in your diet on a regular basis.


Cancer Prevention
Manganese, in which kidney beans are abundant, is one aspect of the antioxidant defense they provide. The crucial oxidative enzyme superoxide dismutase, responsible for disarming free radicals in mitochondria (the powerhouses of the cells), needs manganese. On top of that, the vitamin K in kidney beans has been shown to protect cells from oxidative stress, reducing chances of cancer.

Brain Function
The vitamin K in kidney beans offers outstanding benefits for the brain and nervous system. The myelin sheath, or the outer wrapping around nerve, needs a fat called sphingolipids to form properly. Vitamin K is known to be essential for the synthesis of the sphingolipids, and therefore proper brain and nervous function. Kidney beans are also a good source of thiamin, which is critical for brain cell and cognitive function. This vitamin is needed for the creation of acetylcholine, a neurotransmitter used for memory and the lack of which is a significant factor in senility and Alzheimer’s disease.

Blood Sugar
The soluble fiber in kidney beans decreases the metabolism rate of the bean’s carbohydrates, which prevents blood sugar levels from rapidly spiking after a meal. The kidney bean’s high protein content also contribute to this effect.

Sulfite Detoxification
Sulfites are a preservative typically added to prepared foods such as delicatessen salads and salad bars. Like other beans, kidney beans contain high levels of the trace mineral molybdenum, a key component of the enzyme sulfite oxidase, whose job is to detoxify sulfites. This is important for people with sulfite allergies who are experiencing symptoms such as headache or rapid heartbeat.

Digestive Tract Health
The insoluble fiber in kidney beans helps to maintain bowel regularity by increasing stool bulk. The fermentation of dietary fiber in the large intestine also helps to maintain good bacteria in the digestive tract. Regular bowel movements are associated with a lower risk of colon cancer.

Cardiovascular Benefits
The high fiber content of kidney beans is responsible for their cholesterol-lowering power. The folate they contain helps in lowering levels of homocysteine, which is associated with an increased risk of stroke, heart attack, and peripheral vascular disease. The high content of magnesium found in kidney beans contributes to a healthy cardiovascular system.

High in Protein
IKidney beans are a great source of protein, providing a level of protein comparable to that found in meat or dairy. When beans are combined with rice, they form a complete protein.

Bone Strength
The manganese and calcium in kidney beans work hand in hand to maintain strong bones and along with other trace minerals may help prevent osteoporosis. Kidney beans are also a great source of folate. Research has shown that low amounts of folic acid in the diet lead to an increase in homocysteine levels and significantly increases risk of osteoporosis-related bone fractures, particularly hip fracture in both men and in women. Vitamin K has also turned out to be a critical nutrient for bone health. People who are vitamin K deficient have a greater risk of suffering bone fractures. Vitamin K has been also been shown to help stop fractures in women who have passed through menopause and have already started to experience bone loss.