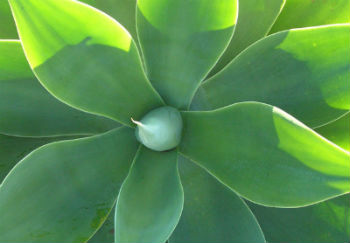 Agave nectar or syrup is a natural alternative to sugar and other sweeteners. It’s made from the agave plant, a type of cactus that grows mainly in Mexico. Most commercial agave is made in Mexico.

Agave syrup is popular with raw foodists and vegans because it is raw and does not come from an animal source and is often used as a substitute for honey.

It’s also important to be aware of the ratio of liquids in a recipe. You may need to reduce the amount of water or other liquid in the recipe to adjust for the added liquid from the agave.

Agave is high in fructose (about 90% fructose) and therefore is lower on the glycemic index than most sweeteners. For this reason, it is often recommended for diabetics.

All of this sounds great, right? However, there is much debate over whether agave is really any healthier than fructose syrup and even some debate over the manufacturing methods used and whether what you are buying is pure agave syrup.

There was an article in the Chicago Tribune a few weeks ago that reported on these concerns and brought up the possibility that manufacturers are adding things like high fructose corn syrup into the mix in order to cut costs. There is also the issue of the detrimental effects of high blood fructose levels. Here’s one quote from the Tribune article:

“It’s almost all fructose, highly processed sugar with great marketing,” said Dr. Ingrid Kohlstadt, a fellow of the American College of Nutrition and an associate faculty member at Johns Hopkins School of Public Health. “Fructose has a low glycemic index so it doesn’t raise blood glucose.” But it raises blood fructose, which is worse.

On the other hand, a registered dietitician interviewed by the Tribune says agave syrup is healthy and contains a complex form of fructose called inulin. He said:

“Bifodobacteria, a type of friendly bacteria, digests inulin to produce short-chain fatty acids that have been shown to fight colon cancer.”

I highly recommend reading the article and reading the other pros and cons of agave before deciding to make it a part of your diet. While agave is probably a healthier sweetener than most, it might be wise to limit the amount you use. I keep it on hand in my kitchen and use it now and then in dessert recipes, but I wouldn’t pour it into my coffee or tea on a regular basis.

Sort by:   newest | oldest | most voted
Kim
Share On TwitterShare On Google

Since I prefer agave “nectar” over other sweeteners, I was interested in some of the conflicting claims alluded to in this blog. Using the Chicago Tribune weblink provided here, I performed searches with AGAVE as my keyword, but no articles were found. All this to likely learn that “less is more.”