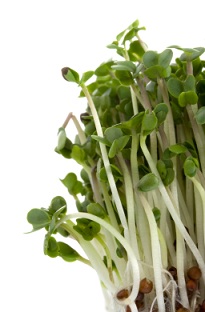 Broccoli sprouts are the immature seedlings of the broccoli plant. Broccoli is a cruciferous vegetable that contains substantial amounts of cancer protective compounds. Broccoli sprouts contain highly concentrated levels of these compounds as well as the many vitamins and nutrients that make broccoli such a healthy food.

Here are some of the cancer-fighting qualities of broccoli sprouts:

Chemoprotection
Some researchers believe sprouts contain up to 100 times the amount of chemoprotective compounds than in that of mature broccoli heads. In fact, a few tablespoons of broccoli sprouts each week may provide as much cancer fighting protection as two pounds of broccoli heads. Research shows that three-day-old broccoli sprouts have the most potent concentration of cancer fighting compounds.

Sulforaphane
Sulforphane is believed to enhance the body’s natural cancer fighting resources and protect against molecular damage to cells and DNA. Sulforaphane may inhibit the growth of breast cancer stem cells while helping the liver to oust harmful toxins and carcinogens from the body. Researchers at John Hopkins found that glucoraphanin, the precursor to sulforphane, is found at highly concentrated levels in broccoli sprouts.

Phase 2 Enzymes
Sulforaphane is an active promoter of phase 2 enzymes, one of the body’s first lines of defense against dangerous, cancer causing chemicals. Detoxicating in nature and an important aspect of liver metabolism, phase 2 enzymes attack and neutralize carcinogens before they harm cells and damage DNA.

DNA Protection
A study at Ulster University showed that eating around 100 grams of sprouted vegetables every day protects against DNA damage, which is commonly associated with cancer risk.

Tumor Inhibition
One study fed rats extracts of broccoli sprouts while exposing them to harmful carcinogens. Those fed the sprout extract developed fewer mammary tumors, smaller tumors, and at slower rates than those not fed the extracts.