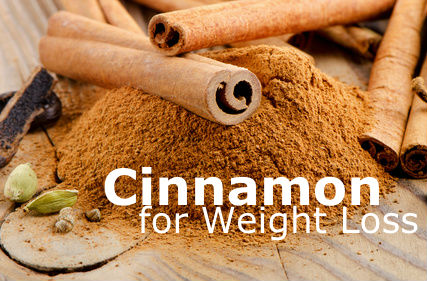 Cinnamon is a great tasting spice that has many health benefits, including weight loss. Here’s how it works and tips on using cinnamon for weight loss.

Why Cinnamon Helps You Lose Weight
Cinnamon can help with weight loss for several reasons:

• Cinnamon Decreases Blood Sugar: When your blood sugar is constantly spiking from the foods that you are eating, you will be more likely to gain weight or have a hard time losing extra weight that is already present. Keeping your blood sugar levels in check is an essential element of weight loss.

• Cinnamon Creates a Chemical Reaction: When cinnamon is consumed, the body actually reacts chemically to digest the cinnamon. This reaction actually speeds up the metabolism in order to offset the extra heat that is occurring as a result of the cinnamon. When the metabolism speeds up, you are burning more calories and you will lose weight more quickly.

How To Use Cinnamon for Weight Loss
With a little bit of creativity, there are many ways that cinnamon can be added to your regular meals. Sprinkle cinnamon on your cereal for breakfast in the morning, sprinkle some on a pear, apple, or other fruit for an afternoon snack, sprinkle it on yogurt, or add some to your coffee or tea.

It doesn’t matter how you consume the cinnamon as long as you eat it on a regular basis. Keep a container of cinnamon readily available so that you can add it to your meals every day.

What Type of Cinnamon to Buy
Make sure to purchase true cinnamon, known as Ceylon cinnamon. Many stores sell cassia, also known as Chinese cinnamon or Saigon cinnamon, which is similar in flavor to cinnamon but does not have the same health benefits. In addition, cassia contains coumarin, a toxic component that can cause kidney and liver damage in large amounts. True cinnamon does not contain these toxic levels of coumarin.

If you want to try cinnamon for weight loss, check out our 4 Best Cinnamon Powders to make sure you buy the right cinnamon powder.