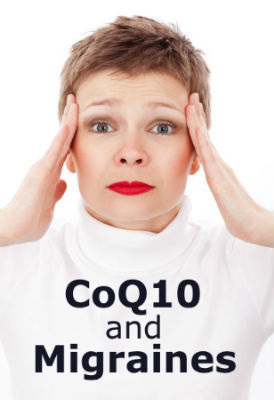 Coenzyme Q10 or CoQ10 is often recommended as a natural remedy in the treatment of migraines. Here’s what you need to know about CoQ10 and migraines.

Studies
Researchers in the neurology department at University Hospitals in Zurich, Switzerland found that treatment with 100 mg of CoQ10 three times per day reduced the number of migraines from an average of 4.4 to 3.2 migraines per month and reduced the overall number of days a patient suffered with headache and nausea. The placebo group had no reduction in migraines.

Another study of CoQ10 that was published in Cephalalgia found that 61.3% of the migraine sufferers, in the trial had a 50% reduction in the frequency of their migraines. These results were the same for migraines with aura and migraines without aura.

CoQ10 has minimal to no side effects for most people. For migraine sufferers who do not want to take prescription medications like beta blockers this presents an exciting possible natural alternative.

Another study found that migraine sufferers are frequently deficient in CoQ10 and that supplementation is helpful.