My mom called last night to tell me she’d peeled a hard boiled egg and it had two yolks. (That’s her egg in the picture below.)

I’ve never seen a double yolk egg myself and I was curious how common it is so I decided to do a little research on the topic.

I found an explanation of the double yolk phenomenon: 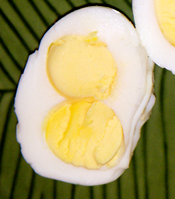 Double Yolkers appear when ovulation occurs too rapidly, or when one yolk somehow gets “lost” and is joined by the next yolk. Double yolkers may be by a pullet whose productive cycle is not yet well synchronized. They’re occasionally laid by a heavy-breed hen, often as an inherited trait.

On that site you’ll also find descriptions of other egg oddities. Who knew you could have no yolkers, double shelled eggs, eggs without shells, spoon shaped eggs, eggs with tails, wormy eggs, triple yolkers, and even a nine yolker? Yikes!

About 1 in 1000 eggs has a double yolk so it isn’t all that rare. In some countries, markets sell cartons of double yolked eggs.

Throughout history and in different cultures, finding a double yolk has been considered to mean anything from an impending wedding to a financial windfall to a death in the family.

So would a double yolked egg produce twins? Probably not:

… the presence of the two yolks would generally lead to an unsuccessful hatch. The nutritional value of the egg white, which is an important food supply for the embryo is insufficient for the two embyros.

23 Comments on "Double Yolked Eggs – Are Two Yolks Better Than One?"

Sort by:   newest | oldest | most voted
Bob
Share On TwitterShare On Google

Recently I bought an 18-egg carton at Kroger and every one of them was double yolked. In fact I am eating two of them as I write.

Vote Up
0
Vote Down
Veronica
Share On TwitterShare On Google

To Chris. Its nothing to do with chemicals and tampering lol. I’m in country Australia. I’ve had free range chooks all my life. I’m now 28. We have always had a few double yolker eggs. It’s just a natural twist in nature. I now have 4 brand new chooks. Only laying for a few weeks and one of those is now laying double yolkers as well. There free range, and eat organic food scraps & grain. Happy healthy chooks 🙂

Vote Up
1
Vote Down
Veronica
Share On TwitterShare On Google

I just come across this post whilst googling the reason for double yolks. As I have a chicken laying at least 1 a week. It’s accrues in young hens that are just starting to lay & there cycle is not yet synchronized. Or, in hybrid hens, it can be very common through out there whole laying cycle. There is nothing wrong with the egg at all. Completely safe to eat. I’ve eaten loads 🙂

Vote Up
1
Vote Down
Sash
Share On TwitterShare On Google

Double-yolkers are rare, but they do happen. Sometimes five in a row! See here http://annystudio.com/show/0033/

i always look out for double yoked eggs we all think they are scrummy yummy and a lot better value for money than any other you can buy.

Vote Up
1
Vote Down
Ell
Share On TwitterShare On Google

Vote Up
0
Vote Down
Brandon
Share On TwitterShare On Google

I just encountered my first double yolker…i was all scared to eat it and decided to do some research. hahah looks like its all good to eat. thanx

Vote Up
0
Vote Down
Sandi
Share On TwitterShare On Google

We were down in Chillawack, BC at the end of August this year and found a place that sold all double yoke eggs! Now they sold in flats of 18 and we bought 2 and gave some to friends!

I was worried that something might be amiss with them but I guess not. I find it very unsual to have all double yokers.

I wish I had asked the fellow some questions about his chickens.

Vote Up
0
Vote Down
kosh
Share On TwitterShare On Google

We got chickens this year, and so far we’ve had ten double yolks. Not sure though as to which one is laying it, as we have nine different kinds of chickens. And we also let them free range and feed them as organically as we can.

And thanks for posting this, we’ve been wondering how this happens and if it would lead to twins.

Vote Up
0
Vote Down
Anonymous
Share On TwitterShare On Google

Our Barred rocks just started laying eggs in the last two weeks and 4 are laying with two of them laying double yokes. They are all free range and organic feed. It is natural till their cycle gets regulated.