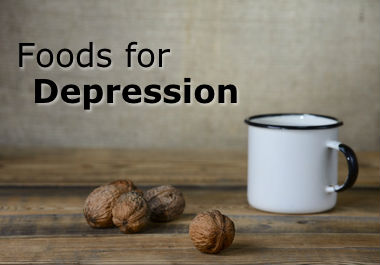 There are foods for depression that can help you to feel better. Even if you don’t feel much like eating when you’re depressed, the foods below can help to lift your mood without making you feel stuffed.

TURMERIC
Research has found that turmeric, and its main component curcumin, may be an effective remedy for major depression. When study subjects were given curcumin and Prozac together, the combination worked better to relieve symptoms than Prozac alone.

VITAMIN C
Vitamin C can improve your mood. Serotonin levels are lower in people with depression and Vitamin C raises serotonin levels. Adding more Vitamin C to the diet may improve one’s mood by boosting this chemical in the brain.

COFFEE
A Harvard study called “Coffee, Caffeine, and Risk of Depression Among Women” published in the Archives of Internal Medicine found that women who drank at least four cups of coffee per day had lower rates of severe depression than women who didn’t drink any coffee.

OREGANO
Oregano has long been associated with happiness and joy and now research seems to confirm it. A study found that oregano extract enhances mental well-being.

SEAFOOD
The omega 3 fatty acids in seafood are good for your mood. In Japan, where much more seafood is eaten than in the United States, rates of depression are much lower. In fact, Japanese boasts the lowest rates of depression in the developed world.

WALNUTS
Like seafood, walnuts are loaded with omega-3 fatty acids that are great for your brain and can help with depression.

PUMPKIN SEEDS
Pumpkin seeds contain L-Tryptophan, an amino acid that helps with sleep. It also contains fats that convert into serotonin, a monoamine neurotransmitter that is essential for maintaining brain health. Low levels of serotonin may lead to anxiety and depression.