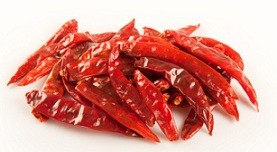 Dehydrating peppers is a great way to preserve them, especially if you grow your own peppers and have a lot of extras. Dehydrated peppers can be used in cooking or ground into powder to make homemade seasonings. You can also save the seeds from your dried peppers for planting next year or to make your own hot pepper flakes.

Here’s how to dehydrate peppers, the first method using a dehydrator and the second method the more traditional method of hanging them on a string to dry.

Note: Always wear gloves when handling hot peppers and if you do get some on your hands, be careful not to touch your eyes or other sensitive areas. Very spicy peppers will stay on your hands for days after you handle them, even after washing repeatedly. Believe me, I’ve touched my eye three days after cutting a habanero and the burning sensation was intense.

What you’ll need: peppers and a dehydrator

(If you want to buy a dehydrator, see our list of the 5 Best Food Dehydrators.) Dehydrating peppers in a dehydrator is by far the easiest way to do it. It only takes hours as opposed to a few days or weeks for the other methods. Just be sure to put the dehydrator in a well-ventilated area because the peppers can put off fumes while drying that may irritate the nose and eyes. If you have children or pets, it’s best to keep them out of the room for the hours that you’re dehydrating.

1. Wash the peppers and dry thoroughly.

2. Slice them into rings, cut them in half lengthwise, or leave them whole to retain their spiciness. Larger peppers do best when cut – otherwise they may take too long to dry. It’s up to you whether you leave the seeds in the cut peppers or not, keeping in mind that peppers get spicier when they are dried and the more seeds you leave in the spicier the dried pepper will be.

3. Lay them on the dehydrator tray in a single layer with enough space around them for air flow.

4. Dehydrate at 135 or 140 degrees (if your dehydrator has an adjustable thermostat) for anywhere from 4-12 hours, depending on the size and thickness of the peppers. Check on them regularly to see how they’re coming along. They’re done when they are brittle but still a bit flexible, with no fleshy areas.

5. Remove the tray of finished peppers from the dehydrator and set them somewhere to cool.

6. Grind into powder or store in airtight containers for later grinding or use in cooking.

(What you’ll need: peppers, dental floss or fishing line, a sewing needle, and a dowel. This method will only work with whole peppers.)

1. Wash the peppers and dry thoroughly.

2. Thread a big needle with fishing line, plain dental floss, or string. You’ll need as much line as will fit the number of peppers you want to dry.

3. Tie the opposite end of the line to a three inch rod or dowel to keep the peppers from sliding off the line.

4. Weave the needle under the stem of the pepper so that if you hold the string horizontally the pepper is upright.

5. Slide the pepper down the string to the rod and repeat with however many peppers you want to dry. Don’t pack them too tightly because they’ll need a bit of room to breathe.

6. Hang the peppers outside in a warm, sunny area.

7. Depending on several factors, including temperature and humidity levels, the peppers may take anywhere from two to four weeks to dry completely.