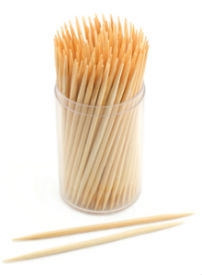 Cinnamon toothpicks are popular for people who are dieting or trying to quit smoking. They also make great sugar free breath fresheners .

Given the many health benefits of cinnamon, sucking on cinnamon toothpicks might be one habit that’s healthy to pick up.

You can buy them but it’s easy to make your own, so why not? Here’s how to make cinnamon toothpicks.

To make your own cinnamon toothpicks, you only need three things: cinnamon oil, toothpicks, and a small Mason jar or other glass jar with a lid.

Cinnamon bark oil is sold in drugstores and health food stores. Sometimes you have to ask for it in drugstores because they keep it behind the counter.

Pour an ounce or two of cinnamon oil into a glass jar, place the toothpicks in, and put on the lid. It’s important to use a lid because that will keep the cinnamon oil fresh and you will be able to reuse it over and over.

Soak them overnight. The longer you let them soak, the hotter they’ll be. Overnight is usually enough to give them just the right amount of cinnamon flavor. If they’re too hot, they might burn your mouth so be careful if soaking them longer than a day or so.

Remove toothpicks from the jar and lay out on a clean, nonabsorbent surface to dry. Don’t lay them on paper towels or other absorbent material because it will soak the oil from the toothpicks. A cookie sheet or surface lined with plastic wrap works well.

Once they’re dry, they’re ready to use. You’ll probably want to keep them in a small, portable container that you can keep in your pocket or purse.

You could use one of those small plastic toothpick containers that toothpicks are sometimes sold in or try one of these ideas: an Altoids mint tin or any small tin, a lipstick holder, or an empty prescription bottle. Just make sure whatever you use is clean!

1 Comment on "How to Make Cinnamon Toothpicks Using Cinnamon Oil"

Sort by:   newest | oldest | most voted
Kent
Share On TwitterShare On Google

I put the toothpicks directly in the oil bottle for two hours. They were plenty HOT!
It reminded me when my Mom made them for me as a small boy. Brings back memories!