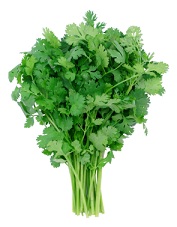 There are a lot of people who vehemently hate cilantro. I’m obviously not one of them since I love it. A lot of people think it tastes like soap. Some people are so averse to the taste (and sometimes the smell) of cilantro that they can’t eat food with a tiny bit of cilantro in it. Others are allergic to it.

Cilantro haters can even find kindred spirits at IHateCilantro.com. There, you will read that “no normally functioning human being would ever in a lifetime consider cilantro edible” and that cilantro is “the most offensive food known to man.”

There’s a theory that a gene causes some people to perceive cilantro as soapy. The Monell Chemical Senses Center, a research institute that investigates taste and smell did a study exploring genetic responses to different smells.

About cilantro, researcher Charles Wysocki said, “Some like it and others hate it and it appears there is a strong genetic influence.”

Celebrity chef Julia Child is among those who can’t stand cilantro. In 2002 she told CNN’s Larry King:

KING: What is that?

CHILD: It’s an herb that it has a kind of a taste that I don’t like.

King then goes on to ask her if there’s an “everyday” food that she hates (meaning one that King has heard of) and she says no, “except cilantro and arugula I don’t like at all.”

Apparently King hasn’t heard of much!

Julia responds: “They’re both green herbs, they have kind of a dead taste to me.” (full interview)

And just for the record, I hate arugula!

2 Comments on "Julia Child Is Among Many Who Hate Cilantro"

Sort by:   newest | oldest | most voted
Susan
Share On TwitterShare On Google

I love cilantro but my husband hates it. So I usually leave it out of the shopping cart.

Vote Up
0
Vote Down
Liz
Share On TwitterShare On Google

I’m not surprised Larry King didn’t know what cilantro was. In another show he said he’s never used a computer! With his job, how is that possible?