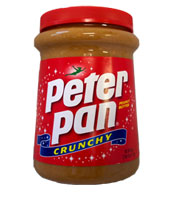 I know the contaminated Peter Pan peanut butter situation is very serious. Two people have died and many people have gotten sick.

However, I can’t help but be a bit obnoxious and declare that Peter Pan peanut butter and all foods containing partially hydrogenated vegetable oil should have been recalled a long time ago.

There is no reason for products with partially hydrogenated oils to be consumed by human beings, but people have the right to eat whatever they want. However, when I read in these articles about the many people who are worried about the salmonella outbreak because they have been feeding Peter Pan to their dogs, I get sick at heart.

You are free to put garbage in your body and clog your arteries, but please don’t feed your dogs partially hydrogenated vegetable oil. They don’t have a say in the matter! It tastes good to them but they don’t know how bad it is for them.

Instead, I buy raw almond butter. It’s delicious and very healthy. And guess what? Your dog (or cat) will love it, too!

A life without peanut butter? Oh my God, how would you live?

Sort by:   newest | oldest | most voted
Carmen
Share On TwitterShare On Google

I give peanut butter to my dog with his pills. Otherwise he won’t eat them. A spoonful of peanut butter make the medicine go down.

Vote Up
0
Vote Down
Hal
Share On TwitterShare On Google