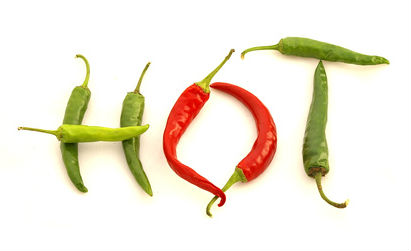 All chili peppers are rated on something called the Scoville scale, a rating system for the hotness of peppers.

The number of Scoville heat units (SHU) a pepper has depends on the amount of capsaicin it contains.

Red bell pepper ranks the lowest on the Scoville scale, coming in at 0 HU. The next lowest are pimentos and pepperoncini, which rank between 100 and 500 HU.

The Naga Jolokia or Bhut Joloki, an Indian chili pepper which is ranked by the Guinness Book of World Records as the world’s hottest chili pepper, comes in at over 1,000,000 HU.

Think you could handle that kind of heat? One bite of a Naga Jolokia can cause burning and pain in the mouth for up to 30 minutes.

But what’s a little pain in exchange for the thrill of saying you’ve tasted the hottest pepper in the world?

why do it for health benefits and not just for the fun of it?